Veep is the series finale of the HBO original series Veep. It aired on May 12, 2019.

Series finale. At the Party Convention, the nominating fight between Selina and her rivals reaches its climax as their race comes to a historic finish.

Roger Furlong oversees the roll call of the delegates at the 2020 National Convention in Charlotte, North Carolina. No candidate has received a majority of delegates. Furlong calls for a late-night meeting between the candidates: Selina, Jonah, Kemi Talbot, and Buddy Calhoun. He asks Selina to consider making Kemi her running mate, but she refuses. Instead, she's considering Ohio Governor John DeVito.

After the meeting, Selina accidentally uses the men's restroom, inadvertently breaking North Carolina's bathroom bill, banning transgender use of restrooms. Also in the news is an attempted bombing at a New York City airport. Meanwhile, also at the convention is Richard, who is interviewed by Mike about rumors of him being considered for a spot in Kemi Talbot's administration.

On the third day of the convention, Selina asks Amy for Jonah's endorsement in exchange for a menial role in her administration. However, it turns out that the suspect in the New York City airport bombing was a muslim math teacher. Delegates begin swinging towards Jonah. In the midst of this, Kemi publicly calls on the FBI to reopen it's investigation into The Meyer Fund.

As delegates continue to leave Selina, Ben suffers a heart attack and goes to a nearby hospital. Meanwhile, Tom James, who suspended his campaign during the primaries, puts his name back into consideration in the midst of the brokered convention. Tom sees Selina at the hospital, along with his chief of staff Michelle. Tom claims that Selina has no political future. Selina then goes to Michelle and plants the seeds that Tom has just been using her sexually. The next day, Michelle goes public that Tom has been sexually harassing her, thus destroying any chances of him achieving the nomination.

Selina continues to work delegates in exchange for their support. She even goes to Buddy Calhoun and promises to repeal gay marriage in exchange for his endorsement. After their meeting, Selina asks Kent to call Jonah and offer him VP--the only remaining way for her to clinch the nomination. Amy begs her not to, but Selina insists that Jonah will be the next Vice President. While he is hesitant to accept the offer, Jonah eventually agrees to become Selina's running mate. Meanwhile, Catherine disavows Selina after her promise to repeal gay marriage. Per Jonah's request, Selina also asks Richard to be Secretary of Agriculture, with her only stipulation being that he fire Dan.

That night, Selina achieves the nomination. Backstage, preparing for her speech, Furlong tells Selina that The Meyer Fund controversy isn't going away and somebody needs to take the fall, something which Selina ultimately concedes to. Selina tries to ask Gary to do something "important" for her but is unable to. Selina goes on stage and reads a speech she stole from DeVito. Gary is apprehended by the FBI and imprisoned for Selina's financial misappropriations. As Selina finishes her speech, she and Jonah take the stage as balloons fall and the crowd celebrates the Meyer-Ryan ticket.

Six months later, Vice President Jonah Ryan and Amy, his chief of staff, attempt to get by Sue and fail to see Selina in the oval office. Meanwhile, Selina, now President, with Michelle and Keith Quinn as her two key advisors, tends to presidential matters. As Michelle and Keith leave, Selina holds back tears as she takes a moment to think about what she did to get where she is, but is interrupted by a phone call with the Israeli Prime Minister.

24 years later, Mike covers the funeral of President Selina Meyer, who only served one full term in office. Guests at her funeral at the Selina Meyer Presidential Library include many of her rivals: former VP Andrew Doyle, former President Laura Montez, Tom, two-term President Kemi Talbot (who is set to deliver her eulogy), and incumbent President of the United States Richard Splett, who has just won a landslide re-election after his historic three-state solution to the middle east, for which he won the Nobel Peace Prize.

Also in attendance are Kent, who has raised a daughter who works for NASA and has watchmaking as a hobby; Amy, who married Bill Ericsson and raised greyhounds; Dan, who has a questionably young wife; and Furlong, who still wheels Will around on a wheelchair. Jonah and Beth watch Mike's coverage of the funeral, stating that he didn't want to go to her funeral anyway, and Beth remarks that it's a good thing that he got impeached so that he wasn't invited. Meanwhile, Catherine celebrates with margaritas as she, Marjorie, and Little Richard watch Selina's memorial service on TV. Also there is Gary, who places the lipstick Selina wanted when she achieved the nomination on top of her casket. He remarks that Selina would have hated the flowers.

As Selina is finally laid to rest in the crypt of her library, Mike begins saying a few words about the President he used to work for--but is interrupted by breaking news: veteran actor Tom Hanks has died, a callback to episode one, where Mike (as Selina's Press Secretary) suggested a blunder may not be picked up by the press tomorrow because Tom Hanks could die. Mike reports on Hanks' death, pushing Selina out of the news cycle one last time.

-Julia Louis-Dreyfus has said that this is her favorite Veep episode of all-time.

-Julia Louis-Dreyfus was asked to host the fourth day of the real life 2020 Democratic National Convention.

-The original plan for the finale, before production went on hiatus in fall 2017, was to have Richard achieve the party nomination and offer Selina the role of VP, and the series would end before she could answer.

This episode was nominated for Outstanding Writing for a Comedy Series, but lost to Fleabag. 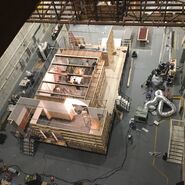 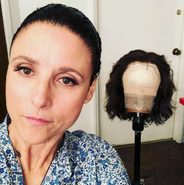 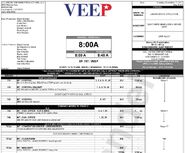 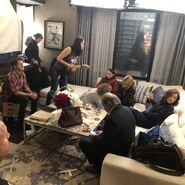 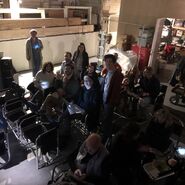 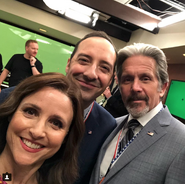 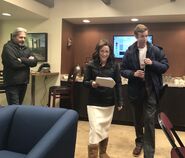 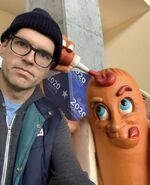 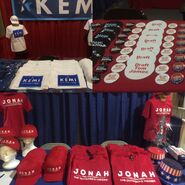 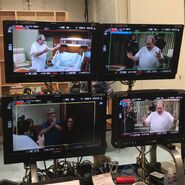 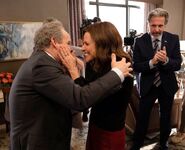 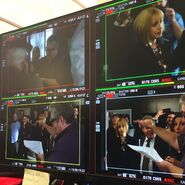 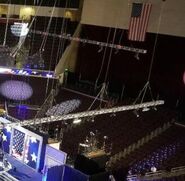 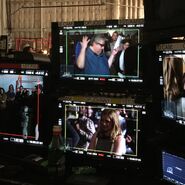 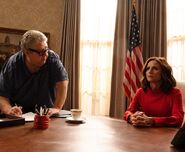 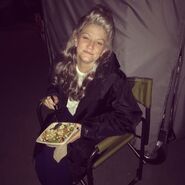 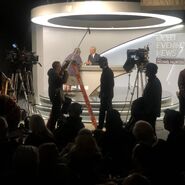 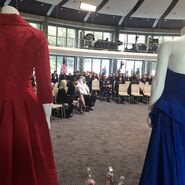 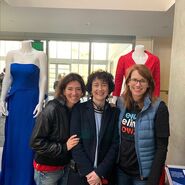 Ben's sponge bath
Add a photo to this gallery
Retrieved from "https://veep.fandom.com/wiki/Veep_(episode)?oldid=18826"
Community content is available under CC-BY-SA unless otherwise noted.