The Eagle is the third episode of the fifth season of the HBO original series Veep. It originally aired on May 8, 2016.

Mike must deal with the consequences of Selina's accidental tweet. Feeling usurped by Bob, Amy begins to be troubled by his behavior. At a museum gala, Gary finds himself the belle of the ball. To justify her tweet, Selina's staff use the strike of Chinese hackers. Missing ballots could win Selina the presidency.

Having made up, Selina and Charlie Baird enjoy dinner at a hot D.C. restaurant. Their relationship is seeing positive reaction in the press, which pleases Selina.

The following day, Selina meets with Bob Bradley via video conference. He informs her that the recount is not going in their favor, but according to Kent, there is statistical evidence of missing ballots in Nevada. Bob decides they need to delay the vote certification to track down the missing votes.

Mike is horrified when he discovers Selina is tweeting publicly from her account -- only he handles her Twitter. He runs to stop her, but Marjorie, her body double, won’t allow Mike in the Situation Room. After finally getting her attention via a security camera, Mike reveals Selina’s jokes about Senator O’Brien to Charlie Baird are public, not private messages as she’d thought.

Since China was behind an earlier security breach, Ben suggests blaming its government for the tweets. After Mike gives this story to the press, O'Brien holds a press conference about protecting the country's digital borders. Selina decides to respond to his accusations with targeted sanctions against China, despite Ben and Kent’s objections.

Amy finds Bob in a supply closet, stuffing handfuls of pens into his jacket. He’s confused about who Amy is and leaves the office without his shoes. A short while later, Selina calls to ask him for advice about China, unaware of his deteriorating mental condition. While swallowing random pills -- including those from a birth control pack -- Bob advises her to take charge with the Chinese -- despite their lack of wrong-doing.

The next morning, Selina gives a press conference and announces sanctions against China. Afterwards, Amy tries to tell Selina about Bob’s odd behavior, but Selina refuses to listen. Later, before an event at the Museum of Natural History, Selina videoconferences with Bob and finally notices his strange behavior.

Selina panics about Bob to Ben and Amy. Jonah interrupts their call with more strange things that Bob has said and done, like blaming hurricanes on Jews. Selina orders Amy to cancel the meeting between Bob and O'Brien's recount head, James Whitman, unaware that it’s already taken place and Bob slipped out unexpectedly. After Amy leaves the call, Selina admits to Ben she told Bob, against Ben’s advice, the Chinese were not responsible for her tweets.

Richard, abandoned at the meeting with Whitman by Bob and Dan, accidentally gets Whitman to reveal the missing ballots are located in Washoe County. When this news reaches Amy, she tells Selina they need to a lawyer to file a Hail Mary injunction to extend the vote certification deadline. Having already anticipated the situation, Selina reveals she sent her noncommittal lawyer friend, Karen, to take care of it.

While everyone in Nevada scrambles to find Bob, he arrives at the Oval Office and asks Selina what the soup of the day is. Ben interrupts the bizarre encounter to tell Selina they found the missing ballots: An anti-Meyer postal worker hoarded 10,000 ballots from one of her strongest districts. He also reveals the Chinese government responded to Selina’s sanctions with those of their own. Among them, a ban on adoptions from the U.S. -- bad news for Mike and Wendy.

Unable to trust Bob with the information he has on China, Selina and Ben decide to make him their Czar of Cyber Security, relegating him to a sub-basement office with no cell reception.

Selina: Can I really blame another country for something they didn’t do?
Ben: It’s been the cornerstone of American foreign policy since the Spanish-American War.
****
Jonah: Earlier today he told me that Jews cause hurricanes.

"The Eagle" received positive reviews. The A.V. Club gave the episode a B+, criticizing the episode's pacing but praising its dark tone.

-This episode was watched by 0.97 million people.

-Part of this episode was filmed at the Los Angeles Natural History Museum.

-If you look VERY closely at Selina's phone while she's sending the mean tweets to Charlie about O'Brien, you can see her tweet: "O'Brien's the first person to be diagnosed with type 1 through 5 diabetes. Instead of bleeding, he mayos."

Selina remarks that it is Thursday the day after the Gala, which would mean the Gala was held on November 16 and the following day was November 17. 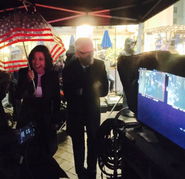 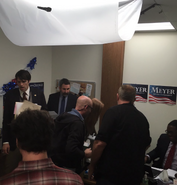 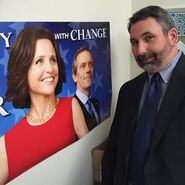 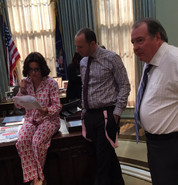 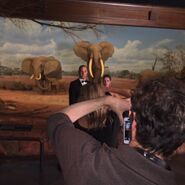 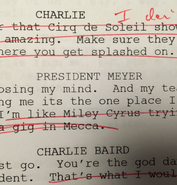 Add a photo to this gallery
Retrieved from "https://veep.fandom.com/wiki/The_Eagle?oldid=17054"
Community content is available under CC-BY-SA unless otherwise noted.