Special Relationship is the seventh episode of the third season of the HBO original series Veep. It originally aired on May 18, 2014.

During a trip in London, Selina is bombarded with questions regarding the state of mind of Ray, whose online beliefs have been recovered by Jonah; Dan has a breakdown which could work in Amy's favor.

Dan, fueled by Red Bull, barks orders to the staff back in the States from his London hotel room. Among his victims is Sue, whom he demands get Selina a short-notice meeting with Prince Charles, that "65-year-old f*cking intern."

Selina attends a reception for the Deputy Prime Minister Peter Mitchell at the U.S. ambassador's residence. Aggrieved that Ray is there talking with smart people, Ben searches out a drink. "It's like watching a goat trying to use an ATM," he says of Ray to Mike and Amy.

Mike works on Selina's speech for the 100th anniversary of the Great War, oratory he considers his "masterpiece." He confirms that Amy's set up Selina's secret Trans-Atlantic Security Organization meeting with the German chancellor. It's "at the Cathedral," Amy explains, so Selina "can lie to the Brits and go straight to confession." At the party, Peter confronts Selina about rumors that the U.S. is moving the TSO conference from London to Frankfurt, but she denies that any decision's been made.

Kent informs a frazzled Dan that Selina is "bleeding blue collars." He promises to have her visit a London pub "to make her look f*ck-off folksy."

Jonah waits in a taxi queue and calls Team Maddox to inform them he's in London and ready to spill the dirt on Selina Meyer. Kent appears next to him in line, tells him he's an imbecile, and calls Amy to warn her "the emu has landed." She realizes Maddox must have sent Jonah to spy. Selina arrives at the pub for her photo op along with the Deputy Prime Minister. She chats with the bar's owner but struggles to understand his thick accent. She and Peter "pull a pint" together for the cameras, and in an effort to one-up Peter, she chugs her pint. The owner calls out encouragement. "Down in one, sweetheart," which Selina mishears as "Daniwah." Assuming it's a kind of cheers, Selina continually repeats it to the delight of the press, although Amy realizes they are "laughing at her like a toddler they taught to swear!"

Selina prepares for the Great War memorial service. Gary gives her a small, tasteful hat to wear -- "the cherry on top of the most delicious sundae" -- but Ray has other ideas. He convinces Selina to wear a much larger, garish hat that Gary deems "too hatty."

Amy shows Dan a London paper making fun of the Veep's pub blunder and refers to Dan as the "Dani-Blah: VP's Campaign Boy Blunder." He insists it's only one paper, which he can handle. "I can chop this thing in two like a disputed kitten," Dan says.

Selina reviews Mike's memorial speech but worries it's too poetic. Dan tells him they need to hit the blue-collar demographic and jumps on the opportunity to let Ray "normalfy it." Witnessing Dan's bad choices and Ray's even worse "corrections," Amy sneaks off and, using a fake British accent, calls Jonah to give him a story about Ray for his blog.

Jonah meets with a local reporter, Rob, and reveals that Selina is "f*cking her personal trainer." Rob is nonplussed, but Jonah goes on to explain that Ray once had a blog and reveals that Ray once claimed "obesity is a punishment for sins committed in a previous life. Fat people have to learn self-discipline until they are rid of the demon that lives within them."

Mike and Ben attempt to keep Peter from knowing that Selina is discussing the TSO move with the German chancellor, but he points out that he can see the top of her ridiculous hat above the wooden partition. "So we're all perfectly comfortable standing here pretending that we can't quite clearly see the Vice President in the Lady Chapel, with the German Chancellor, finalizing a deal about the TSO?" he asks. Ben assures him he wouldn't consider it comfortable.

Selina and Peter give a press conference about the 100th anniversary of the Great War, but the reporters are far more interested in the Ray story, which blindsides Selina. In another room, the staff watches the press conference unfold in horror. Suddenly, Ben is forced to leave for D.C. -- claiming an emergency -- and Dan collapses from a panic attack. While Amy brings Dan to the hospital, Kent takes Ray aside to fire him, but Ray is too stupid to understand.

Following the press conference, Gary accidentally reveals that Dan hired Ray to be Selina's "sex slave" and that everyone knows this but her. Jonah arrives to at the hospital to tell Dan he's the one who leaked the Ray story, and Selina sends a text firing Dan. Back at the Deputy Prime Minister's residence, Kent reveals that the First Lady attempted suicide, which is why Ben was called away. Selina decides it's time to "get the merry ol' f*ck out of merry ol' England" and officially makes Amy her campaign manager.

Selina: What a fucking misery marathon that was. [Looks around] Where is everybody?
Mike: Dan had a nervous collapse, Amy's taking him to the hospital, Ben went back to DC, Kent's firing Ray, and I'm in charge.
Selina: ...Fuck.
Mike: I know, right?
Selina: I should just go back out there. Did you see that?
Mike: Yeah, I saw.
Selina: Why? Why am I in London talking about my enormous jiggly-ass ass?
Gary: Ma'am, but people love people who were, like, fat, then they're no longer fat.
Selina: No, they don't.
Gary: Right.
Selina: Fat people don't even vote. They can't even be bothered to get out of the house, you know? No food in the voting booth.
*****
Gary: Dan only hired him as a sex slave.
Selina: He pimped me out?

-This episode takes place in December 2015.

-While previous episodes set outside of Maryland were filmed in Baltimore (see Helsinki), this episode actually was filmed in London.

-The scene between Amy and Mike in the beginning of the episode, supposedly taking place in the US Ambassador's residence in London, was filmed in the Veep's West Wing office set in Baltimore.

-The scene where Gary accidentally breaks "the Queen's china" was not scripted. Tony Hale accidentally broke it but Julia told him and Matt Walsh to just go with it.

-Justin Edwards and Rebecca Gethings, who starred on Armando Iaunnuci's previous show The Thick of It, both make guest appearances in the episode, although they play different characters.

-The hotel room Selina stays at (with the branches on the walls) is a real hotel room in London. It's the Wedgwood Suite at the Langham Hotel in London. 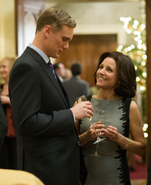 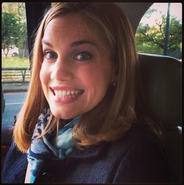 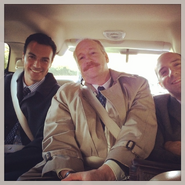 Add a photo to this gallery
Retrieved from "https://veep.fandom.com/wiki/Special_Relationship?oldid=17901"
Community content is available under CC-BY-SA unless otherwise noted.