Start a Wiki
Pledge is the third episode of the seventh season of the HBO original series Veep. It aired on April 14, 2019.

In the run-up to the first debate, Selina makes a novel campaign proposal. Comments by Jonah create blowback. Dan and Amy take a road trip.

Selina grows annoyed by Kemi Talbot's identity-based campaign, which has led to a massive popularity boost. She is also horrified to discover her ex-husband Andrew has embezzled millions of dollars from her campaign fund in her name, as part of the ongoing investigation into The Meyer Fund.

Amy's sister Sophie Brookheimer arrives to give her a ride to her abortion. However, she gets drunk and has sex with Dan, resulting in Dan being the one to take Amy to the clinic.

At a campaign event, Selina is unsettled to find a small crowd. As a result her staff sends her to a county fair to meet with potential voters. While there, Mike asks Selina about investigations into Andrew's shady business dealings, leading Selina to urge all the other candidates to pledge to have an issue based non-negative campaign. Her pledge backfires when all the candidates agree and Kent discovers that Kemi was involved in a car accident that killed her boyfriend when she was 16.

At the fair, Selina runs into Tom James and urges him to break the pledge at the first debate by feeding him the information on Kemi.

Jonah Ryan is also at the fair and, after he uses the word retard multiple times, Teddy Sykes urges him into PR training. The training goes badly as Jonah does not understand why he should not use offensive words. However, he manages to irritate one of his coaches and results in a lawsuit.

Richard attends the funeral of the Mayor Biscuit, the deceased dog mayor of Lurlene, and is recruited into replacing him, causing him to quit the Ryan and Meyer campaigns.

At the debate, Tom tries to double cross Selina by revealing that she fed him negative information on Kemi and by revealing she had a heart attack, something she told him in confidence during the previous episode. Kemi manages to deflect the attack. During the commercial break, Selina searches for a new angle and becomes annoyed when Catherine tells her to support Kemi, telling her to "Man Up!" Her impulsive response draw praise from Ben and Kent, and Selina returns to the stage and gives a new speech talking about how the younger generation is too coddled and using her new slogan to wide support from the audience.

Amy goes through with the abortion and is helped by Dan. While she is in recovery, she is contacted by Teddy who offers her the position of campaign manager on the Ryan campaign, which she accepts.

-This is the first episode since Season 5's Inauguration to be watched by a million people or over. This can be attributed to the premiere of Game of Thrones, which aired earlier that night, whose premiere raked in 11.7 million viewers. "Pledge" was watched by more than twice the amount that watched the previous episode.

-The original debate premise was going to be the fourth episode, and it would have focused on Selina and her team practicing for the debate. The "Man Up!" phrase was also part of it.

-Jonah was originally going to get lost in a corn maze in an early draft of the episode. At one point, you would only see his head in the maze.

-The original premise for the episode also had Selina accidentally killing the dog mayor with a car and forcing Gary to bury it in a corn field.

-The original title for this episode was "Kemi Fever".

A newspaper clipping on the Jonah Ryan presidential website revealed that this episode took place on the weekend of May 16 - 19th, 2019, with the debate taking place on the 18th.

The same newspaper appears in the episode, and if you pause when it appears, it details the events that will happen during the rest of the episode. 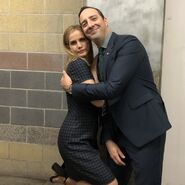 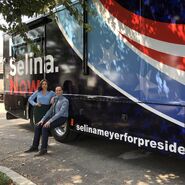 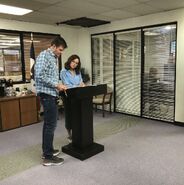 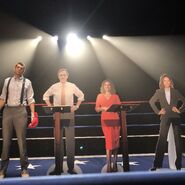 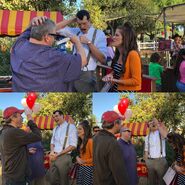 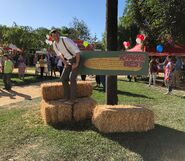 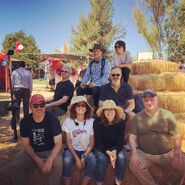 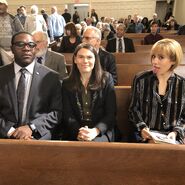 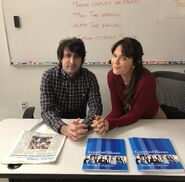 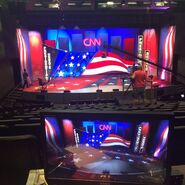 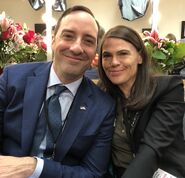 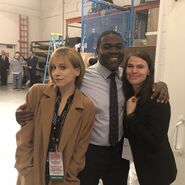 Gary's county fair prize
Add a photo to this gallery
Retrieved from "https://veep.fandom.com/wiki/Pledge?oldid=17736"
Community content is available under CC-BY-SA unless otherwise noted.