Omaha is the first episode of the sixth season of the HBO original series Veep. It aired on April 16, 2017.

One year after losing the presidency, Selina tries to secure her legacy; Dan tries to ingratiate himself at his new job; and Amy's brash D.C.-style personality proves too much for her new co-workers.

Making her first appearance since the election, Selina reflects on her year as an ex-president on CBS This Morning, now co-hosted by Dan. She plugs her memoir, and when Dan probes her about the Tanz pardon, she pivots and announces her foundation: The Meyer Fund for Adult Literacy... and AIDS. Asked about another presidential run, Selina clarifies she has “no plans to run...at this time.”

After the interview, Selina meets Andrew and kisses him, to Gary’s dismay.

Selina arrives at her new office in the South Bronx. Unhappy with the location, she orders Richard to focus his efforts on procuring lucrative speaking engagements. Marjorie, now heading the Meyer Fund, expresses her concern about the fund’s focus on AIDS, before leaving for lunch with Catherine. Catherine, the beneficiary of her grandmother's fortune, slips Selina her monthly allowance.

Stevie, a CBS producer, tells Dan he’s getting promoted to permanent co-host. Nervous he’ll be fired like his past three predecessors, Dan suggests having Jonah appear on the show.

Gary gives Selina options for her portraitist, and Richard updates her on prospective speaking engagements. She pushes him to find a private jet to get her to a speech in Omaha, later admitting she's interested in Omaha since it’s a short drive to the Madison Monroe dinner, where you go "if you’re gonna run for president again.”

In Nevada, Amy tries to run an attack ad but Buddy vetoes the idea.

Gary and Selina play backgammon in Selina’s brownstone and Richard shows up to help write her memoir. When they call Mike for help, the former press secretary, now overwhelmed by his kids, asks to be compensated and Selina agrees.

Dan catches Jonah shaving his head before his interview. Jonah admits he stayed bald for the pity, even after he stopped treatment. Dan pushes Jonah’s buttons until he loses it on camera.

Selina shares her presidential aspirations with family and friends… and receives no encouragement. She reluctantly agrees not to run. Post-presidential reality setting in, Selina takes a commercial flight to Omaha, as she watches CBS This Morning with host "Danny Egan".

-Selina and Gary playing backgammon in her brownstone was the first scene of season six to be filmed.

-There originally was a scene in this episode with Jonah's Uncle Jeff Kane.

-Jonah has one of his testicle's surgically removed due to testicular cancer. This is foreshadowed in the pilot episode when Amy is being escorted out of the VP's office by Jonah, Amy remarks "Touch me and you'll lose a finger. And a ball."

This episode begins one year to the day since the House vote, and the trip to Omaha would be the following Monday, so that would mean this episode took place January 3 - 8, 2018. 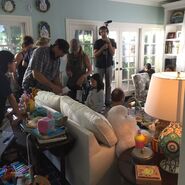 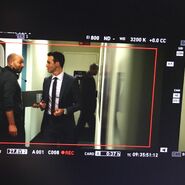 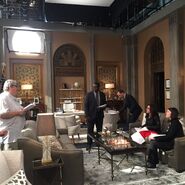 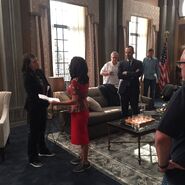 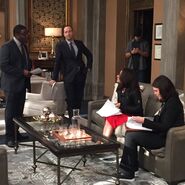 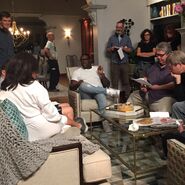 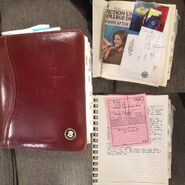 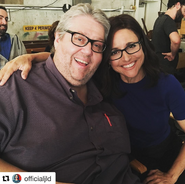 Add a photo to this gallery
Retrieved from "https://veep.fandom.com/wiki/Omaha?oldid=18738"
Community content is available under CC-BY-SA unless otherwise noted.