Nev-AD-a is the second episode of the fifth season of the HBO original series Veep. It originally aired on May 1, 2016.

Dan and Amy supervise a recount in Carson City, Nevada, hoping the recount will go statewide in an effort to win Selina the presidency; Selina gets intimate with a member on her new banking task force.

In Carson City, Amy takes an early morning call from Selina, who's questioning whether or not they should include the Native American precincts in the recount. Later in the day, Dan, Amy and Richard review Selina's multitude of precinct changes for her recount challenge, then send their lawyers to file it at the courthouse before they miss their deadline.

When Selina and her staff learn that Senator O’Brien hired Secretary of State James Whitman to head his recount team, they decide to hire respected Washington figure, Bob Bradley, aka “The Eagle,” to lead theirs.

Selina decides to send Tom James to a campaign volunteer brunch in her stead, but learns as Economy Czar, Tom has his first meeting with his banking task force at the same time. Liking that more than her brunch, she tasks Ben with informing Tom his task force is now hers.

Selina introduces Bob Bradley to her staff via video conference, and Richard makes an unwitting comment about a mail-in ballot discrepancy, which he believes may have disqualified a bunch of Meyer votes, as the county clerk is an O’Brien fundraiser. After a review of the votes in contention, Selina has enough votes for a full state recount.

During a meet and greet with the bankers on “her” task force, Selina takes a shine to EM Wheelwright CEO Charlie Baird. Later, through veiled language, she convinces Ben to arrange a second “discreet banking task force meeting,” aka, a hookup with Charlie.

Tom drops in on Selina and tells her he now understands her decision to take over his banking task force, and promises to do whatever he can for her going forward, without complaint. Selina is bewildered by the 180, but Ben explains that Tom believes she’ll win Nevada, and thus the presidency.

Charlie arrives and Selina gives him a tour of the West Wing. They stop at a closet where, Selina points out, Warren Harding fathered a child with his teenage mistress. The sexual tension high, Selina invites Charlie back to the Residence for a “tour.”

Dan and Amy, high off their victory in Nevada, return to their hotel rooms, which happen to be located across the hall from each other. A sexually-charged moment passes between them, but is interrupted when Amy's sister Sophie unexpectedly emerges from Amy's hotel room.

Selina is quick to toss Charlie out post-hookup, despite his wanting to see her again. She tasks Gary with getting him out of the Residence unseen, and Charlie, just by being polite to Gary, quickly wins him over.

Later, Selina is stunned when a news report announces Charlie accepted a cabinet position with Senator O’Brien. He comes by to apologize and explain the meeting had been on the books long before he met Selina, but she doesn’t care.

Dan and Amy have drinks at a Carson City bar, and Amy coyly invites him back to her room. Before he can leave, Sophie takes Amy’s seat at the bar and piques Dan’s interest when she reveals she works for CVS -- which Dan mishears as CBS. When Sophie invites Dan back to her room, he accepts. In D.C., Ben wakes to a litany of drunk-texts from Amy, who thinks she’s been texting Dan about joining her for a nightcap, and getting no response.

Amy: [to Richard] What is wrong with you, you Paddington Bear-looking fuck?

Dan: You just gave them a Time Life instruction manual on how to fuck us.

Jonah: You guys have Michael Jordan sitting on the bench here, but you're starting Hakeem Olajutwat.

Amy: You are not Michael Jordan. You are a seven-foot-seven goony-looking Lithuanian who's gonna drop dead of Marfan syndrome. Get your ass in the car!

-This episode was watched by 1.01 million people.

-The original title of this episode was just "Nevada", then it was changed to "Nev-ah-da", and then changed to "Nev-AD-a". Some believe the 'AD' together is a reference to Amy and Dan.

This episode takes place after the previous episode, dating this episode to November 11 - 12, 2016. 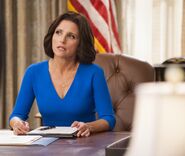 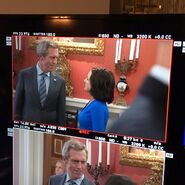 Add a photo to this gallery
Retrieved from "https://veep.fandom.com/wiki/Nev-AD-a?oldid=18849"
Community content is available under CC-BY-SA unless otherwise noted.