Library is the second episode of the sixth season of the HBO original series Veep. It aired on April 23, 2017.

Selina attends the opening of former President Hughes’ presidential library; Jonah gets advice on how to rise in the political ranks; Dan suffers through Jane’s whims; Amy releases an attack ad.

Selina attends the opening of President Hughes’ library, feigning grace and belittling Hughes to Gary. Mid-photo with the first wives, she is alerted that the other ex-presidents are being photographed in front of Air Force One. She sprints to make the photo-op. After the ceremony, Selina suggests building her presidential library at Yale.

Jonah asks Furlong if he can fill a seat on the Ways and Means committee, but Furlong tells him to stay on the Ethics committee “with the rest of the special ed breakfast club.” Ben and Kent tell Jonah he needs a girlfriend if he wants to succeed and Jonah reluctantly agrees to be set up.

Posing for Helen the portraitist, Selina receives an update from Andrew about the library: He’s found someone who will donate $20 million. Richard informs her Yale said no, but Smith College, where Selina was an undergrad, might be interested.

Jane reviews Dan’s reporting on a Polar Bear Club and kills the segment, despite Dan’s participation in the plunge. Across the country, Buddy and Amy react to the aftermath of his attack ad; Amy is thrilled but Buddy looks sick.

Driving up to Smith, Richard tells Selina the library will cost $300 million. Selina instructs him to tell Smith "We’ve got it all;” Andrew adds, “We’ll shuffle papers around till it looks like we do.” Smith president Regina Pell greets Selina and her team, and they sit down with a student reporter who asks about the Tanz pardon. Selina addresses the question, to everyone’s surprise.

Upon their return to the brownstone, Catherine and Marjorie announce they’re going to have a baby; Gary is delighted when Selina volunteers his sperm.

Jonah goes on three dates at the same restaurant, all arranged by Kent. The first date bolts when Jonah goes into detail about his testicular surgery. The next date disgusts Jonah with talk about her mastectomy and she leaves. Jonah’s third date seems to be a good fit until Dan interrupts and tells her to run.

Selina and team are driving to a fundraiser when Andrew receives an explicit text from Selina’s portraitist. The message plays through the car’s speaker system. Gary defends Selina by attacking Andrew and Selina tells the team to fire Helen.

Depressed in bed, Selina talks to Amy on the phone. Marjorie and Catherine check in, and Selina suggests now might not be the best time to have a baby. The next day, Mike reveals Helen went public, claiming she was wrongfully terminated.

Selina returns to Smith where she is met by protesters angry over Helen’s dismissal. Regina apologizes for the protesters but tells Selina the library needs to be put on hold.

A video of Buddy getting a DUI tops the Nevada news cycle. They hold a press conference, and Amy, forcing a smile, stands by her man.

Richard: "I'm gonna scratch it into the paper and then kind of go back over and trace over and see what I wrote before, like in a suspense movie."

Jonah: "Do you have any current pictures of your mother? I’m gonna need both front and rear.”

-The Stuart Hughes library scene below Air Force One was filmed at the Ronald Reagan Presidential Library in California. The Hughes Oval Office scene was a built set, however. The Steptoe press conference was filmed at the plane outside the Reagan Library. 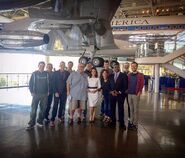 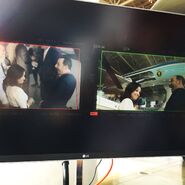 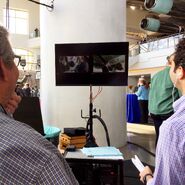 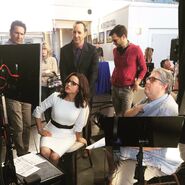 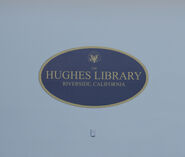 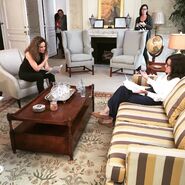 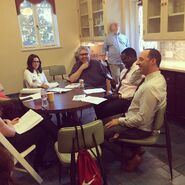 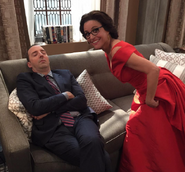 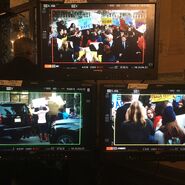 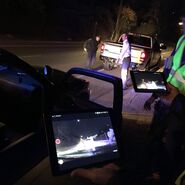 Add a photo to this gallery
Retrieved from "https://veep.fandom.com/wiki/Library?oldid=18837"
Community content is available under CC-BY-SA unless otherwise noted.