Montez was born in Connecticut and raised just outside of Cleveland, Ohio. She later moved to New Mexico and married Alejandro Montez, who was born in Mexico. In the 2016 presidential election, she was selected to be the vice presidential nominee on the opposition party ticket alongside Arizona Senator Bill O'Brien. The O'Brien-Montez ticket went up against incumbent president Selina Meyer and her running mate, former Senator Tom James. However, the electoral college tied, and after the House was unable to choose between O'Brien and Meyer, the Senate selected Montez as vice president-elect. Because no president was selected by the House, Montez immediately assumed to the presidency on January 20, 2017.

During her tenure as president, Montez reached across party lines to fulfill a Supreme Court vacancy, nominating former president Stuart Hughes to succeed the late Justice Tenny. Montez was also able to navigate the 2018 government shutdown, wherein a coalition of congresspeople known as the Jeffersons struck down a debt-ceiling bill and demanded that the government eradicate daylight savings. Montez's presidency also boasted a flourishing economy.

Montez was awarded the 2017 Nobel Peace Prize after the freeing of Tibet earlier that year when it was actually Selina Meyer who had negotiated Tibet's independence. Meyer's role in the mediations weren't revealed until October 2018, wherein Montez was condemned for assuming credit for the negotiations she had no participation in. This controversy likely had a large impact on her unsuccessful re-election bid in the 2020 presidential election, which she lost to Meyer.

Laura Priscilla Cunningham was born in Connecticut and raised just outside of Cleveland, Ohio.

In 2001/02, Laura moved to New Mexico. She married Alejandro Montez, a Mexican-born whose family is from Jalisco, Mexico. In Selina Meyer's autobiography, Meyer claims that the decision to marry Alejandro was shrewd, calculated, and a political move; however, this is just Meyer's opinion and perhaps out of spite.

Laura and Alejandro soon had Caterina, and then twins Alonzo and Jorge.

In August 2016, O'Brien and Montez were campaigning in Florida when a hurricane hit. This allowed the duo to use the opportunity as a photo op. O'Brien famously pulled a teddy bear out of the ruins of a house.

On election night, the electoral college tie presented the possibility for either vice presidential candidate (herself or James) to become president. On January 3, 2017, the House of Representatives failed to choose a President, leading to a vote in the Senate where VP-elect would become president. Despite James being favored to win in the Senate, Vice President Andrew Doyle collaborated with Montez and House Speaker Jim Marwood to give Montez the presidency to spite Meyer for offering Secretary of State to Paul Graves.

The vote in the Senate on January 5 certified Montez's election as vice president-elect. Marwood announced that the House of Representatives would not vote for president again. When Montez took the oath of office on January 20, 2017, she immediately assumed the office of the presidency.

Shortly before Montez's presidential inauguration, her and outgoing President Meyer seemed to bump heads at a coffee meeting between the two in the Red Room. At her inauguration, Montez gave an inaugural address primarily in English with additional Spanish. During her address, CNN credited her with the freeing of Tibet that had been negotiated by Meyer at Camp David a month prior. According to Meyer in her autobiography, Montez did nothing to clarify who was responsible for the Tibet credit and gladly accepted the glory. Later that year, Montez was awarded the 2017 Nobel Peace Prize for the freeing of Tibet.

Montez attended the opening of the Stuart Hughes Presidential Library and Museum with Alejandro when it opened in January 2018.

In March 2018, following the death of Supreme Court Justice Tenny, Montez was tasked with nominating a supreme court justice to replace Tenny. It was speculated that former President Selina Meyer would be on that short list, and the rumors escalated when Montez announced she would reach across the aisle for the Justice pick. Ultimately, Montez nominated former President Stuart Hughes.

In July 2018, a group of congresspeople known as "The Jeffersons" torpedoed a bill to raise the debt ceiling that had been approved both by Speaker Marwood and Minority Leader Furlong. This led to a government shutdown.

Montez appeared at Selina Meyer's portrait unveiling later that day, but had to cut her speech short in order to deal with the shutdown.

Montez attempted to make a deal with congressman Jonah Ryan to end the shutdown, but he refused until she ends Daylight Savings. She went behind his back and makes a deal with the rest of the Jefferson coalition, who renamed themselves under the direction of Clarence Clark.

After a news story about the Meyer presidency revealed that Montez did nothing to free Tibet and it was all Meyer, Montez's favorability took a hit. According to Kent towards the end of Groundbreaking, Montez's numbers are "under agua".

In Super Tuesday, it was revealed that Montez is running for re-election and that Keith Quinn and the Chinese are helping her get re-elected. When Selina Meyer secretly made a deal with China to give them back Tibet, the Chinese switch their allegiance to Meyer. The Meyer-Ryan ticket won the election with foreign interference from the Chinese.

Laura Montez's presidency ended at noon on January 20, 2021. She is the last known opposition president in the Veep universe. However, the timeline dictates that it is possible there could be two one-term or one two-term opposition presidents before Richard Splett, the current President, took office in 2041.

In 2045, Montez attended the funeral of former President Selina Meyer. The funeral was also attended by former President Kemi Talbot, who, unlike Montez, would be the first multi-racial president of the United States. Jonah Ryan, watching from home, remarked that Montez still looks attractive.

It's implied based on Montez's appearance that she had plastic surgery.

-In the show, the House of Representatives deadlocks during the vote for president, and neither Meyer nor O'Brien are elected. The Senate elects Laura Montez for vice president. Since the presidency is vacant, Montez ascends to the presidency. In real life, this situation could not occur. If there is no president-elect certified by Inauguration Day, the Vice President-elect would serve as acting president. The House of Representatives would have to continue holding votes until there is a winner, at which point the acting president would go back to serving as vice president. It would not be possible for the House to allow the acting president to remain in office indefinitely.

-Montez's daughters name is Caterina. This is an Italian/Catalan form of the name Catherine, the daughter of Selina Meyer.

-Montez is the second person in U.S. history, the first being President Benjamin Harrison, to be preceded and succeeded as president by the same person. 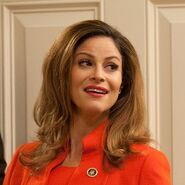 Retrieved from "https://veep.fandom.com/wiki/Laura_Montez?oldid=18715"
Community content is available under CC-BY-SA unless otherwise noted.