Kissing Your Sister is the ninth episode of the fifth season of the HBO original series Veep. It originally aired on June 19, 2016.

The House votes on who will be president; Catherine finishes her documentary; The staff plans on firing Mike.

Through Catherine’s critical lens, the inner-workings of the Meyer administration are revealed in the weeks leading up to the historic House of Representatives vote to elect the next president. The documentary digs into the emotional toll running for president takes on the candidate, her staffers and her loved ones. The documentary also follows Catherine’s personal journey of self-discovery, as she falls in love and finds her calling.

President Selina Meyer anxiously watches C-Span's broadcast of the vote from the Oval Office. Alabama is first in the roll call, and casts its vote for President Meyer.

In a private interview, Selina reveals the moment she knew she wanted to be president was as a girl at Nixon’s inaugural ball. “Daddy leaned into me and he said, ‘You know, a lot of people don’t like Nixon, but by God they respect him. And that’s you, peanut,’ " she reminisces.

With his vote integral to Selina’s chance at winning, Jonah wakes up in the bed of an underage “Congressional fangirl” in Maryland, after the vote has commenced. He frantically calls Richard to pick him up and deliver him to the Capitol. A furious Selina rings Jonah, telling him "You are already dead. What you do now, you do for your family!"

Catherine interviews Bill Ericsson from jail who makes his disdain for Selina blatant: “If I were Tom James, I would just try to get three states to abstain and then it would go to the Senate, serving the president the most abject humiliation in the history of the United States.”

Through surreptitious filming, Selina’s plan to fire Mike after the inauguration is exposed. Catherine visits Mike at home and sees how he and Wendy have been preparing for a baby through the twists and turns of the surrogacy and adoption.

In another one-on-one interview, Catherine asks Selina about the possibility of losing, prompting memories of Selina’s first run for Congress, and her first defeat. When Selina mentions retreating to a spa in Arizona, Catherine interjects, “Is that when you had your nervous breakdown?” and her mother stumbles to recover.

Selina instructs Rep. Paul Graves of Michigan to stall while Jonah is located; Catherine recounts the time leading up to Mee-Maw’s death, chronicling the time she spent on the campaign trail with Jonah, and an interview with Richard Splett.

Rushing to the vote, Richard crashes into a stop sign and suggests calling an Uber. Jonah declares, “We can’t call an Uber. I’ve been banned for life because I have a low rating.” When Missouri abstains from the vote, Selina blames Tom.

Marjorie and Catherine’s relationship develops, and Catherine joins her family on the Chippewa-Cree Reservation in Montana for Christmas. When Marjorie introduces Catherine as her “work friend,” they have a fight and break up.

The vote uncovers three abstentions, and it is apparent that Selina cannot be president. Selina, furious with Tom for potentially securing the next 12 years, wants Jonah to vote for O’Brien, so she can at least challenge him in four years time.

Jonah finally gets to the vote. Unaware of any change in plan, Jonah delivers his vote for Selina. Neither Meyer nor O'Brien receive a majority of the final vote, leading to a Senate vote where the vice president-elect will become president.

Marjorie and Catherine make up and establish a rescued farm-animal sanctuary in Palm Beach.

Jonah: "How am I doing? Eating so much pussy, I'm shitting clits, son."

Jeff: "Hey! This is an Elementary School! Shut your spewing mouth, you animal!"

Selina: "Alabama first in the alphabet, last in every other fucking thing."

Ben: "I believe it's number one in easiest state - to get away with murdering a black guy."

Tom: " Did you ever play sports? Remember how no one ever wanted to play catcher? Playing catcher is kind of like being the economy czar. There's not a lot of glory, but a lot of squatting. And a lot of asses in your face."

This episode received universal acclaim, many calling it the best of the season and some the best of the series. Kate Kulzick of The A.V. Club gave the episode an A, saying "the writers taking advantage of the opportunities presented by this format to explore the characters in new ways while delivering a consistently hilarious episode."

-This episode was watched by 0.90 million people.

-This episode was the first to be directed by new show runner David Mandel.

-The U.S. House set used in this episode was the one used in the HBO film "All the Way".

-At Richard's Gilbert and Sullivan society show, Danny Chung can be seen next to Richard.

The House vote is revealed to take place on January 3, 2017. 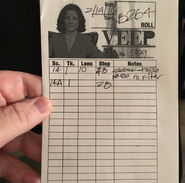 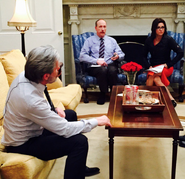 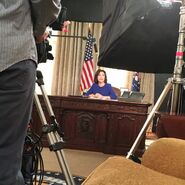 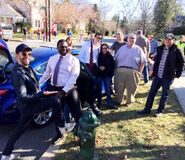 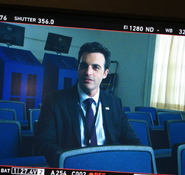 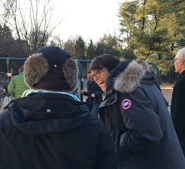 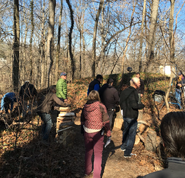 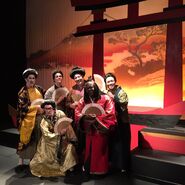 Add a photo to this gallery
Retrieved from "https://veep.fandom.com/wiki/Kissing_Your_Sister?oldid=17180"
Community content is available under CC-BY-SA unless otherwise noted.