Justice is the fourth episode of the sixth season of the HBO original series Veep. It aired on May 7, 2017.

Selina and her team attend the funeral of a Supreme Court justice. Amy works on securing a location for Selina's library. Dan tries to maintain his upswing with Jane, his co-host. Jonah finds an issue.

Selina and her staff attend the funeral of Supreme Court Justice Tenny. Swarmed by reporters after the service, Mike denies rumors that Selina is being considered for the seat, thus starting the rumor that she is, in fact, being considered.

Later that day, Selina meets with Sherman Tanz in order to ask for $5 million for her library. In exchange, Tanz asks her to connect him with someone in Congress to support privatized prisons.

Selina feels sick, and Amy suggests her symptoms may be menopause. A doctor makes a house call and determines that Selina had a small heart attack -- triggering Gary’s heart attack.

Dan joins Catherine and Marjorie at the fertility clinic, and the doctor reveals that Dan’s sperm have low motility, making him a bad candidate for donation. The couple receive news about Selina’s heart attack and head to Washington.

At the hospital, Selina reluctantly agrees to attend Gary’s 40th birthday party in Alabama in an attempt to comfort him. Catherine insists Gary stay at their brownstone while he recovers.

Selina learns she needs a routine operation to have a stent placed in her heart. Right before the surgery, Selina asks Richard and Amy to recruit Jonah to back up Tanz’s initiative. Amy calls Jonah, who agrees to meet with Tanz, despite not knowing who he is.

Hoping to prevent news of her surgery from leaking to the press, Selina instructs Richard and Amy to communicate she’s in a “routine closed-door meeting.” Richard delivers this message to Dan when he calls for a scoop on the Supreme Court seat; Dan interprets it as confirmation that Selina is being considered.

President Montez holds a press conference and says she is looking to reach across the aisle with her Supreme Court nominee. Senator Hallowes contacts Amy about setting up a pre-vet meeting for Selina. As her chances for the seat improve, Selina redefines her legacy as “me in a robe taking guns from this guy, giving the death penalty to that guy,” so she doesn’t need to focus on building her library or writing her book anymore.

When Jonah is an hour late to his meeting with Tanz -- having forgotten it was daylight saving time -- Tanz spitefully writes him a check for one cent. The next day, Jonah is two hours late to a meeting, after he mistakenly “springs back.”

Selina receives a call that she did not get the Supreme Court seat nomination; Montez instead nominated former President Stuart Hughes.

Mike: “I just habitually deny everything these days."

This episode begins the Monday before the 2018 Daylight Savings and ends the following Wednesday, meaning this episode took place from March 5 - 14, 2018. 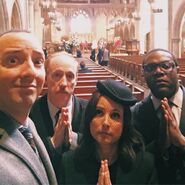 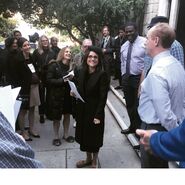 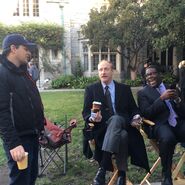 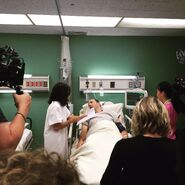 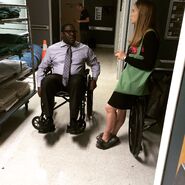 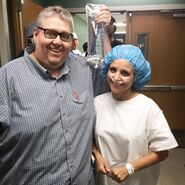 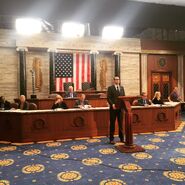 Add a photo to this gallery
Retrieved from "https://veep.fandom.com/wiki/Justice?oldid=18835"
Community content is available under CC-BY-SA unless otherwise noted.