Start a Wiki
Judge is the eighth episode of the sixth season of the HBO original series Veep. It aired on June 11, 2017.

Selina takes a trip. Dan pressures Jonah into an interview. Amy is put in charge of Mike.

Selina and team arrive in White City, Alabama to celebrate Gary’s 40th birthday. Gary’s mom, Imogene, meets the team and explains his father, Judge, is off with his associate on a hunting trip. Judge returns and they give Selina a tour of the house.

Mike meets with Leon West at the Washington Post offices and pitches a humor column. He gives West a sample of his work but is brushed aside.

Brie and Dan report on Jonah’s rally against Daylight Saving Time. With his job still at risk, Dan is told to get an interview with Jonah to save it.

As Catherine and Marjorie leave for a “herstorical” tour, Selina puts Amy in charge of the memoir with Mike, who has joined them in Alabama. Mike discovers he lost his diary somewhere on his trip south.

Jaffar shows up and Judge ushers him in to his house as a “person of interest.” Jaffar tells Selina they can be together now that his father is dead, and he’s found a new imam who is a lot more “chill.” She asks Jaffar to use his energy contacts to fundraise for her.

Dan calls Jonah, but he won’t agree to an interview unless he gets tickets to Spider Man: Turn Off the Dark -- which closed on Broadway years ago. Jonah eventually agrees when Dan offers to party like they did “when they were best friends.”

Jonah meets with Montez who tells him he has “accomplished more in one month than most stupid people do in a lifetime.” She agrees to give in to Tanz’s list of demands if Jonah ends the shutdown. When she refuses to end Daylight Saving Time, Jonah loses it. Ben tries to convince Jonah to take the Montez deal and Jonah fires him.

Jaffar tells Selina his energy guy, Quartie Sturges, is reluctant to donate because he thinks Selina is stuck up. Selina responds by inviting Sturgis to Gary’s party, which she has reconceived as a humble country get-together with Confederate flags.

Turned off by the whole ordeal, Gary’s friends and family leave. Selina, striving to be more relatable, makes a speech with the childhood story Gary was planning to tell to honor his father. At his breaking point, Gary yells at his dad and goes to dance with his mom.

Mike and Amy find the diary at Dulles airport security. Amy flips through the book and it turns out Mike accidentally picked up Leon West’s diary -- meaning West has his.

Jane shows up to steal Dan’s interview with Jonah, and as they begin. Jane announces breaking news: an agreement has been reached to end the shutdown. They cut to the White House where Montez and the rest of the Libertonians (né Jeffersons) make an official statement.

As Selina and team leave, Richard tells Selina that Sturgis has agreed to donate to the library.

This episode apparently begins 23 days after the end of Blurb, which ended on July 13th. That would mean this episode takes place August 4 - 6, 2018. 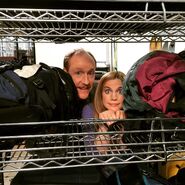 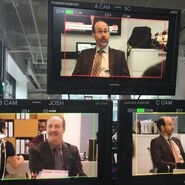 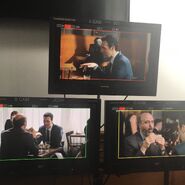 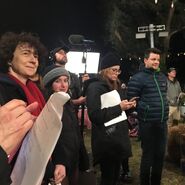 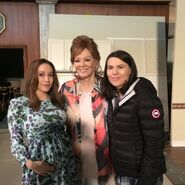 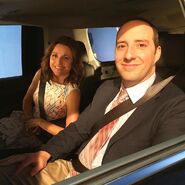 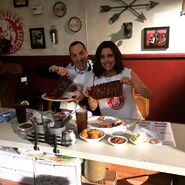 Add a photo to this gallery
Retrieved from "https://veep.fandom.com/wiki/Judge?oldid=16969"
Community content is available under CC-BY-SA unless otherwise noted.