Joint Session is the first episode of the fourth season of the HBO original series Veep. It originally aired on April 12, 2015.

Selina is about to make her first big speech as president; The staff adjusts to their new roles in the White House.

The day before Selina is set to give her first address to a joint session of Congress, Mike, Dan and the new Director of Communications, Jim, struggle to put her speech together. Selina asked for it to be vague but then rejected a draft because it was “too vague.” Dan complains that they still don’t know what Selina wants in the address. “What are we supposed to do? Google it like a best man speech?”

In the Oval Office, Ben and Sue brief Selina on her appointments and disastrous world events. Disappointed he’s not allowed to join her in an intelligence briefing, Gary is further aggrieved when a Secret Service agent requests the bag -- and only the bag -- be brought in to Selina.

Jonah arrives at Vice President Doyle’s offices, where Doyle tasks him with being his “West Wing wiretap”. Doyle complains that Selina is freezing him out, perpetuating the “cycle of abuse.” Afterwards, Teddy Sykes, Doyle’s Chief of Staff, confronts Jonah about not arranging his visit to go through him first. Jonah apologizes and Teddy appears to brush it off. “We need guys like you,” he tells Jonah. “This game takes guts.” Then Teddy grabs Jonah’s crotch, explaining that the VP’s office also “takes balls” and “you got ‘em, buddy.” As Jonah moves towards the elevator, Teddy blocks him, asking Jonah to let him know when he’s dropping by in the future. “I’ll always let you in,” he says, pointedly.

Selina reviews polling figures with Ben, Kent and Dan as she tries to figure out a way to make budget cuts while also introducing spending for her Families First plan. Ben advises her to do a “cock-thumb,” which Dan defines for her: “We propose a radical cut to the military, cutting off the cock; the Joint Chiefs in turn propose their own more reasonable cut, cutting off the thumb.” Selina agrees to the plan.

After hearing rumors that presidential candidate Joe Thornhill may be quitting the race, Amy takes a meeting with his campaign manager, Bill Ericsson, at a local hotel. Ericsson reveals that Thornhill is not quitting -- but Ericsson is. Furthermore, Ericsson says he finds her job as Selina’s campaign manager very interesting, which puts Amy on edge.

Gary, anxious at having been shut out of the President’s life, takes Dan’s suggestion to observe her through the “FLOTUS window” that looks into the Oval Office. “A lot of anxious first ladies use it,” Dan smirks.

Selina, Ben and Kent meet with the Joint Chiefs and successfully “cock-thumb” them; the Joint Chiefs propose to cut a submarine program which will save $50 billion. Selina, Ben and Kent celebrate. “That wasn’t a cock-thumb -- that was a cock-cock!” Selina shouts. Adds Ben, with delight: “I nearly puked.” Jonah, having spotted the unscheduled meeting through Gary’s FLOTUS window, runs to inform Doyle, who arrives too late and out of breath.

The next day, Selina reviews her speech before she addresses the Joint Session. “It’s 50 shades of great!” she exclaims. As she prepares to leave, Gary takes her glasses out of her pocket, claiming the bulge makes it look like she has a penis. After Selina leaves, Congressman Furlong enters and confronts Selina’s staff about the submarine program she is about to cut, a move that would “torpedo” 1,900 jobs in his district. Though Amy insists that the fleet is as useless as having an “anti-unicorn strategy,” Furlong reminds them that the parts of a submarine are not made in one place -- but many. “We are going to lose votes and seats everywhere, so take the periscope out of your asses and look at the warhead of shit that’s coming at you!” He assures them that Selina can say goodbye to her Families First bill as a result. “Lawmakers in these districts are going to Vulcan death grip you to f**k,” he promises.

Ben delivers the bad news to Selina right before she takes the podium. She orders Ben to have the submarine cuts removed from the speech -- and fast. Although she has a hard copy to work from while her team rewrites and the Teleprompter is blank, Selina is unable to read it because Gary took away her glasses. “Why have you blinded the President, Gary?” Dan asks the bagman, who admits, “No one hates me as much as I hate myself right now."

Selina wings her opening as her staff works furiously. She calls for a long moment of silence for President Hughes and the former first lady, as if they are dead, and waits for her speech to reappear on the Teleprompter. Unfortunately, Mike has uploaded the wrong draft, which still contains placeholders and blanks. Selina is forced to improvise once more, and when the text updates again, it contains the President Hughes’s old spending plan. Selina announces an increase to spending on the submarine fleet she had planned to cut. Afterwards, Selina admonishes her staff for their massive screw-up. “Whole cities of children were going to be saved from poverty,” she seethes. “Now, that money is going to fund obsolete, metal, giant dildos."

Selina is said to have been inaugurated in January. The speech indicates Selina is in her "first few weeks" of her presidency, so this episode should take place in February 2016. 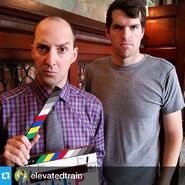 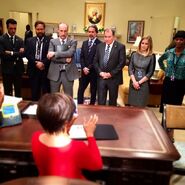 Add a photo to this gallery
Retrieved from "https://veep.fandom.com/wiki/Joint_Session?oldid=18860"
Community content is available under CC-BY-SA unless otherwise noted.