Iowa is the first episode of the seventh and final season of the HBO original series Veep. It aired on March 31, 2019.

The 2020 presidential election campaign has begun. While both Jonah and Buddy Calhoun have announced their campaigns for the party nomination, Selina still dominates the polls despite having not even having announced.

Selina decides to announce her candidacy in Iowa, where her exploratory committee headquarters are also located. Initially, she was set to announce at the Eastern Iowa Airport in Cedar Rapids, however due to a miscommunication, she and her team landed in Cedar Falls instead. This causes the announcement to be set back.

Meanwhile, Jonah holds a campaign event in New Hampshire, claiming he's skipping Iowa not because his poll numbers are low there. He allows his new wife, Beth Hennick, to speak, but Teddy and Bill are horrified to learn that they were at one point step-siblings.

Selina then travels to Lurlene for a photo op with the ceremonial dog mayor of the city. When she makes a remark to the press about not having had breakfast, Gary hands her a piece of chocolate, which Selina accidentally feeds to the dog mayor, who later falls into a coma. Meanwhile, Amy attempts to grapple with her feelings for Dan and her unexpected pregnancy.

Her team decides to announce at the birthplace of Susan B. Anthony in Adams, Massachusetts, where she announced her first run in 2008. When they arrive, they find that her campaign at the time never payed the crew to set up the stage and tents, and they have refused to put them up for this occasion. Distraught that the press is arriving to a failed rally, Selina prays for a miracle. That moment, it is reported that a shooting had occurred at a mall in Phoenix, resulting in 27 dead. Despite the tragedy, they are overjoyed that they could not possibly announce in the aftermath of the shooting.

As they are leaving the Susan B. Anthony birthplace and museum, the press asks Selina about the shooting, which she unexpectedly turns into a campaign announcement, recycling the criticism she had received from one of the stage setters that refused to set up the rally.

Jonah is interviewed by Jane McCabe with his wife and mother, but is blindsided by the appearance of his stepfather, resulting in a televised squabble. Selina and her team watch in amazement as Ben tells her that Jonah's poll numbers are up among white males after he married his stepsister. Selina then learns that Tom James is running for President.

There is no indication of how long after the sixth season this episode takes place. However, considering Amy is still pregnant (with the conception having been in October 2018, see A Woman First) and having just started showing (barely) and Jonah met his wife at least two months ago, it's likely this episode takes place in March/April 2019.

This is the first time an episode has aired around the same time it takes place (see timeline). 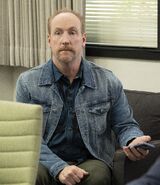 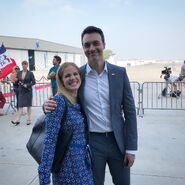 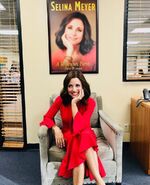 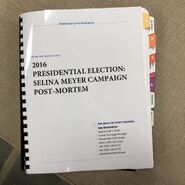 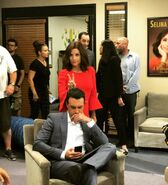 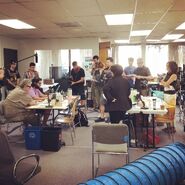 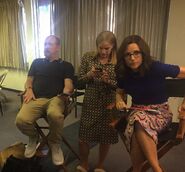 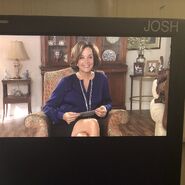 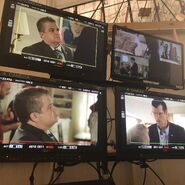 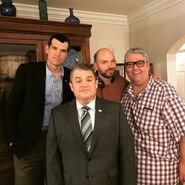 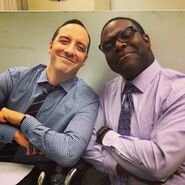 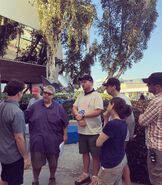 Jonah's campaign ID
Add a photo to this gallery
Retrieved from "https://veep.fandom.com/wiki/Iowa?oldid=14487"
Community content is available under CC-BY-SA unless otherwise noted.