Inauguration is the tenth episode and the season finale of the fifth season of the HBO original series Veep. It originally aired on June 26, 2016.

Selina is offered the position of Vice President, while planning her future; Mike's children arrive; Gary breaks down; The staff is shocked by yet another tie.

Mike hosts a press conference regarding the House vote results. He stakes his reputation on the fact that “Selina Meyer will never be vice president ever, ever again.”

Selina offers her “help” to Tom who will likely become an accidental president. Selina wants to be Secretary of State. Tom counters with “vice president -- take it or leave it.”

At a legacy meeting with the team, Kent tells Selina she is the 43rd most-liked president out of 44, ranking just above James Buchanan. Selina proclaims her legacy should be the freeing of Tibet.

Desperate to make Tibet happen, Selina meets with a Qatari delegate who relays that the Chinese are hesitant because Selina will soon be out of power. To convince them otherwise, Selina reveals she will become the vice president.

Selina goes to inform Tom of her acceptance of the offer of vice president; he tells her she is going to be a very important part of his administration, snickering all the while.

Jonah walks into his office to find three very attractive male interns. He is, at first, perplexed as to how Richard did not equate Jonah's request of "hot interns" with what he really meant, i.e. "girls", but after Colt brings him a fantastic latte, Jonah decides he can keep them, to Richard's delight.

CNN reports on the Senate vote for vice president; because the presidency is vacant, the winner will assume the role.

On video chat, Selina tells Chinese President Lu she is excited to continue working with him. Lu responds he is excited to work with Senator James. Selina retires to the Roosevelt Room to watch the Senate vote, which results in another tie. The final decision is in the hands of the current vice president, Doyle, who votes for Senator Laura Montez to become the next president of the United States. Amy’s intel suggests Doyle orchestrated the whole thing because he is getting Secretary of State.

Gary melts down, accusing the entire team of letting “that magnificent woman” down, saying that he was the only one out of them who cared.

One day before Montez’s inauguration, Selina clears out her office. Ben and Kent run into each other at a publisher’s office. Mike updates the press with Montez’s itinerary, and Selina sees on MSNBC that Charlie Baird has been selected as Secretary of the Treasury.

Selina finds Richard cleaning out Jonah’s old office and invites him for a drink. She ponders how she will get by in the real world before curling up, drunk, on the floor.

The next morning, Selina wakes up hungover. Jonah’s roughhousing with his staffers disturbs Roger Furlong, who tells him the first rule of hiring male staff: “They must be substantially less attractive than the congressman.”

Amy runs into Candi Caruso, Montez’s new chief of staff. Mike and Wendy introduce Ellen, their adopted 'baby' to the team, and Selina has tea with Montez and her family.

Dan covers the inauguration for CNN. On the inaugural platform, Selina confronts Doyle. After Montez is sworn-in, CNN reports that “mere minutes into her presidency, President Montez has brokered a deal with the Chinese government to free Tibet.” Selina struggles to say goodbye to her team, and boards her exit helicopter only to land shortly after, due to engine troubles. Arms folded, waiting for her motorcade, Selina listens to Montez’s parade.

After the inauguration, Dan gets an offer to work for CBS News, Jonah is diagnosed with testicular cancer, and Bob Bradley mistakenly congratulates President Montez on winning the Nevada recount, believing her to be Selina.

Selina: "I mean, if I had had a hundred Richards, who knows what I could've done?"

Richard: "Well, I mean, probably a lot. Or it could turn out like one of those Twilight Zone scenarios where we all murder each other."

This episode received mostly positive reviews, with many critics surprised by the series-finale-like ending. Kate Kulzick of The A.V. Club gave the episode a B, saying "the writers deliver a comparatively subdued finale, more concerned with sending each character off into the sunset satisfyingly than giving them each a final, memorable moment."

-The Chief Justice who administers the oath of office to Montez is played by Frank Rich, an executive producer of Veep.

-This episode was watched by 1.15 million people, the most amount of viewers since season two's Shutdown.

The scene in which Selina asks Tom to be Secretary of State is said to take place the day after the House vote, and one day before the Senate vote, meaning Selina asking Tom would take place on January 4th, and the Senate vote would take place on January 5th. However, the episode then jumps ten days later, and is said to be one day before Inauguration Day. This wouldn't make sense, as that would mean Inauguration Day is January 16th. 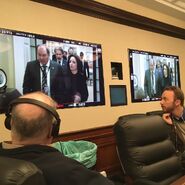 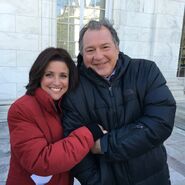 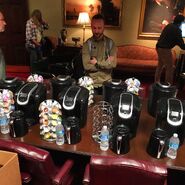 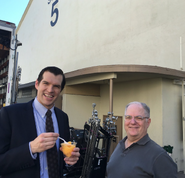 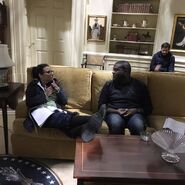 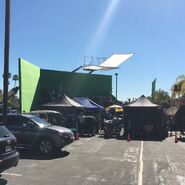 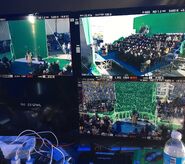 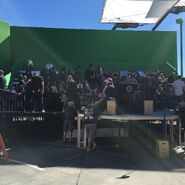 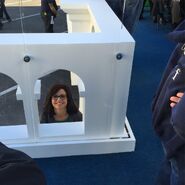 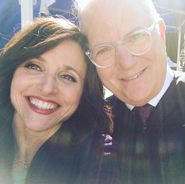 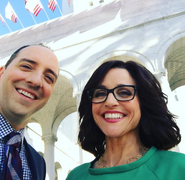 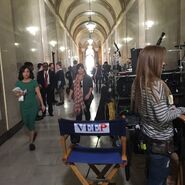 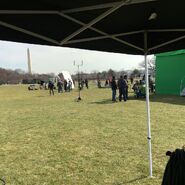 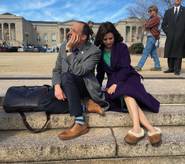 Add a photo to this gallery
Retrieved from "https://veep.fandom.com/wiki/Inauguration?oldid=16978"
Community content is available under CC-BY-SA unless otherwise noted.