Hostages is the third episode of the second season of the HBO original series Veep. It originally aired on April 28, 2013.

When a hostage crisis in Uzbekistan ensues, Selina has conflict with the Secretary of Defense George Maddox during their joint appearance at the Marine Corps Base in Quantico. Sue testifies at a Congressional hearing. Dan and Gary fight for the Veep's approval.

Selina is distressed to see Sean Penn is doing more about the Uzbek Hostage Crisis than the White House. The cause is close to her heart because the hostages are all about her daughters age. To shock DC into action, Dan rewrites the speech she's going to give at the Marine base that afternoon. He has her calling for a robust response, which is subtle enough to still seem loyal to President Hughes but will electrify DC. She and Dan express their surprise that the famously cantankerous Defense Secretary George Maddox hasn't said a word about her joining him at the Marine base for a visit.

Meanwhile, Cliff, Sue's fill-in while she testifies at the Congressional Hearing on Governmental Efficiency, arrives. Gary reminds him to take care of Selina: "VP stands for 'very precious.'"

An angry Ben confronts Kent about Hughes' decision not to strike. "I was talking to POTUS last night he had a pro-strike hawk boner the size of Jonah, and then YOU talk to him this morning and hes suddenly totally against the operation!" Kent stands by his cold numbers that don't support intervention, but Ben and Amy argue that the VP wants a quick military strike: "Precise and surgical like your lobotomy, Kent." He stands by his inaction, sharing his "noodle analogy;" hostage situations and cooking cup-a-noodles both require precision timing and neither should be rushed.

At the base, Selina does a meet-and-greet with the marines before Defense Secretary Maddox arrives. Dan steps in and takes over Selina's ear, simultaneously generating small talk and pissing off Gary.

Before Selina takes the podium, Maddox questions her decision not to consult him about her speech. "With this hostage situation, I dont think you have the intelligence. As in, Intel, of course." To prove his point, he asks her how many countries border Uzbekistan. To the surprise of both, Selina correctly guesses five.

Sue testifies at the efficiency hearing, but despite having been told to be dull, her scathing attitude takes over. Caught in a rare moment of insecurity, she accidentally uses the word "robust" three times. Back at the base, Selina takes the podium as Amy learns of Sue's slip. They scramble to come up with a new word to replace robust, but when Dan tells Gary he needs the Veep's ear, he denies him: "Get your own ear, Van Gogh." The next morning, a livid Selina learns that Sue stole her spotlight. Dan brings her a word cloud that shows robust front and center, along with a giant "Sue" and a miniscule "Selina."

After Maddox gives a speech calling for an "aggressive response," Ben calls a meeting to reprimand them and get everyone on the same page: they're now calling for a "calculated response." Kent interrupts to announce they can finally move on the hostages. Maddox offers January 6th or 9th and Ben agrees they should move as early as possible for fear that Hughes will "procrasturbate forever" and change his mind. Selina agrees to the 6th once she confirms it's the same date as Sue's second hearing.

Amy confronts Selina about her choice of date, but Selina denies she's trying to overshadow Sue. When she confirms that Cliff cleared her calendar, she learns he made a "f*** up the size of France." He neglected to mention the senator swearing-in ceremony - which is immovable. The day of, Selina tries to suppress her nerves while swearing in thirty-three senators, but fails: her small talk is the worst anyone has heard. Afterwards, she rushes to the "shituation room" - a glorified closet patching her into the real Situation Room. The rescue mission is successful - and Sue coverage gets wiped off the news map.

Later, Jonah delivers the mission evaluation to Selina. All the hostages were recovered unharmed, though a Marine sergeant, due to be rotated out on the 8th, lost his leg above the knee. She realizes with horror that had she not insisted on the 6th to eclipse Sue, the Marine would be fine.

Selina: Hello, Marine, you have a nice face... and, where did you serve?

Ben: "How do you make two perfectly pleasant words so irritating? And here he is, the man who can't take a leak without polling his balls."

"Hostages" received positive reviews. The A.V. Club gave the episode an A-.

-This episode takes place in January 2015.

-According to the crew, it was around five degrees when the shooting range scene was filmed. It was also filmed around Inauguration Day 2013. It was very cold, and they had a tent set up with a heater in it so the crew can stand there in between takes. According to Julia Louis-Dreyfus, Matt Walsh got too close to the heater and his jacket caught on fire, and Julia began singing "Matt Walsh is on fire!" as a play on the "Obama is on fire!" song circulating around that time.

-President Hughes is briefly seen in this episode, in the situation room monitoring the Hostage crisis. Selina says "Mr. President" to him via live satellite. He is only seen for a few seconds and this is his only appearance in the series. 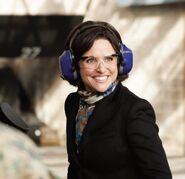 Add a photo to this gallery
Retrieved from "https://veep.fandom.com/wiki/Hostages?oldid=18879"
Community content is available under CC-BY-SA unless otherwise noted.