Groundbreaking is the tenth episode and the season finale of the sixth season of the HBO original series Veep. It aired on June 25, 2017.

Selina and her team prepare for the long-awaited groundbreaking of her library. Amy seeks clarity on her role. Jonah asks Dan, Ben and Kent for help.

Six years earlier: Selina makes a concession speech in Cleveland following a devastating defeat in the 2012 primaries. Balloons cascade from the ceiling; clearly someone missed the memo.

In the present, Jaffar and Selina celebrate six months together and are harassed by paparazzi; Leon West presses about Selina’s stay in Arizona.

Two years earlier: Catherine and Marjorie visit Selina at the Whispering Sands Wellness Center. Selina is clearly not herself: “Losing was just the best thing. Because politics has a sickness, Catherine, and it’s sick.”

Amy shows Selina a model of the library, and Marjorie remarks it looks like a vagina. When Amy mentions “the library might be situated on the site of Yale’s former slave quarters,” Marjorie informs Catherine, who declares Selina can’t build the library “on the oppressed backs of the ancestors of my child.”

Six years earlier: On her first day as VP, Selina learns her office will not be in the West Wing as promised. Ben, Hughes’ chief of staff tells Selina the president doesn’t want her to do anything. Intern Jonah Ryan kisses up to Selina on her way out.

In the present, Jonah begs Tanz to help him return to power. Tanz refuses: “From now on I’m only buying senators and presidents."

Sixteen years earlier: Selina greets voters during her senate campaign and learns from they’ve run out of money. When Selina finds Andrew in a compromising position with a donor, she extorts a contribution from her in exchange for silence.

In the present, new BKD Consulting client Danny Chung works with Ben, Kent and Dan on an action plan for his campaign. Amy meets with them about coming on board; when she mentions talking to Selina, they assume she’s out and end the meeting.

Selina arrives at Yale for the library groundbreaking and President Caldwell informs her they are halting construction due to a Washington Post story about its problematic location. Catherine’s water breaks, and she, Marjorie and Richard rush to the hospital.

Twenty-four years ago: Selina gives birth to Catherine, but is uninterested in being a mother. Gary, a candy striper at the hospital, gives Selina ice chips. After the birth, Selina decides to run for Congress.

Selina gets to the hospital after Catherine delivers. Bombarded with photographers as they leave, Selina grabs the baby and makes a statement, using the child to express her disappointment in Yale's history of slavery. When Leon West asks about the spa, Selina talks about both her mother’s and daughter’s struggles with mental health.

Amy apologizes about the library and Selina tells her she leaked the library story to Leon West because she’s not ready to be a former president; instead, she wants to run again. The team celebrates and Selina credits Tibet for her political revival. Seduced by political opportunity, Selina breaks up with Jaffar because of his “baggage.”

“If it were up to me, we’d be putting up drywall on your vagina building today.”

-An overview of the flashbacks in this episode: 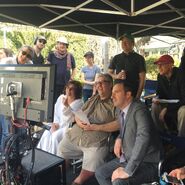 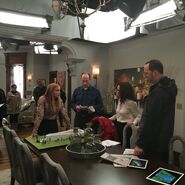 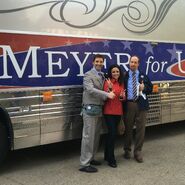 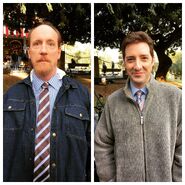 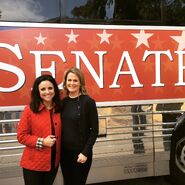 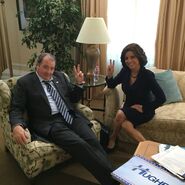 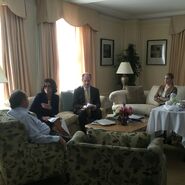 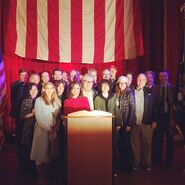 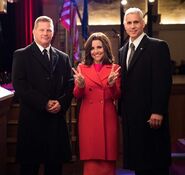 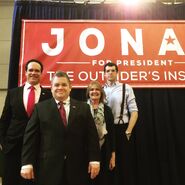 Add a photo to this gallery
Retrieved from "https://veep.fandom.com/wiki/Groundbreaking?oldid=18829"
Community content is available under CC-BY-SA unless otherwise noted.