Election Night is the tenth episode and the season finale of the fourth season of the HBO original series Veep. It originally aired on June 14, 2015.

On election night, Selina and her staff find their nerves growing frayed as each state result is called.

As polls are about to close on the night of the presidential election, Selina sits on the bed in her hotel suite, staring out into the night while her staff comes in and out to check on her and offer encouragement. “I’ve asked America if she wants me to be her president,” she tells Gary, as she leaves to watch the results with the others. “Now, she’s going to give us her answer.”

At the CNN studios, Dan and Amy sit side-by-side in makeup chairs before going on-air. They’ll be discussing the election results with respected statistician Matty Curtis, who tells them that the Meyer/O’Brien election is the closest race in living memory.

At Selina’s election-night rally, Jonah and Richard wait in the wings. Jonah basks in his newfound fame as the “Testicle Man.” he’s turned his sexual abuse story into a dual cause -- fighting workplace bullying and promoting testicular health.

Selina and her staff watch the election results, and the race remains tight. Gary applauds the news of Selina securing Vermont and Connecticut, but Selina isn’t nearly as positive because “a bowl of hair could win those states.”

Bill Ericsson comes in with new projections, glumly noting that he’ll have plenty of time to review them when he’s in prison. Catherine insists that no one came out of the hearings unscathed -- she had to break up with her fiancé. “I’ll be thinking about that while I’m with whichever guy makes me his prison fiancé,” Ericsson retorts.

As more and more big states are called for O’Brien, Selina’s chances at remaining president grow increasingly slim. She and Tom chat about the election away from the others, and Selina asks Tom if he thinks they would have won if he’d been running for president, but he won’t speculate. Kent then delivers some game-changing news -- the call that gave Wisconsin to O’Brien has been rescinded. Ericsson adds to everyone’s delight, announcing that Colorado has also been called for Selina.

Suddenly emotional, Amy decides to leave the studio and be with Selina, explaining to Dan that she spent a third of her life leading up this very night.

With the election going their way, Tom asks to speak privately with Selina. He explains that he doesn’t want to be impotent in her administration, especially in light of all the positive things he’s done for her campaign. Selina agrees, thinking that he wants the power and privileges historically denied to VPs, but Tom explains that’s not what he’s after. He wants to be treasury secretary -- as well as her Veep. “This administration was coming apart at the seams during those hearings,” Tom reminds Selina in the face of her indignation. “And I used six rolls of magic tape to put it back together.”

With the race still neck in neck, Amy and Sue arrive at Selina’s hotel suite right as Pennsylvania is called for O’Brien. Amy mutters that she knew Selina should have gone back there. Selina, acknowledging Amy was right, asks, “Why’d you ever resign?”

As more projections are made, it appears that O’Brien will be the winner and calls for Selina to concede are made. Tom urges her not to give up just yet, reminding her that projections aren’t real results. Despite Tom’s urgings, Selina decides to call O’Brien and concede. Meanwhile, Dan calls Mike to tell him that Pennsylvania was the wrong call -- they expect the votes to go to Selina after all. Mike drops the sodas he was sent to fetch and bursts back into the hotel room right before Selina tells O’Brien she’s out.

Jonah calls Kent, begging to give the restless rally crowd “a hit of political meth” by sending out Tom James. Kent relays the query to Selina, who, after making discreet eye contact with Amy, refuses. States continue to be called, with the final result hinging on whether Virginia is called for O’Brien or Selina. If the votes go to O’Brien, he wins, but if they go to Selina, they tie.

Everyone scrambles to figure out what happens in the event of a tie, learning that the House is given until January 20 to elect the President by giving each state one vote. The first candidate to 26 votes becomes the president, and the Senate chooses the VP. Further complicating matters are the tight races within the House. In the event of a tie in the House, the vice president-elect becomes president, meaning there’s a very real possibility that Tom James could “win” the election.

Selina begins to sob and goes straight to Amy for an awkward hug. Jonah calls Tom, whom the crowd is begging for. He leaves “to rally the rally” while Amy consoles Selina. “With all due respect, you need to get your shit together now, lady,” she tells her. “Ma’am up. You’re still the leader of the free world.”

Despite it being highly unconventional, Selina decides to take the stage once she learns Tom has gone to rally the crowd. She calls her entire team on stage while waiting for the results on Virginia. Finally, Dan announces that the votes have gone to Selina, and the election ends in a tie.

Afterwards, Tom apologizes to Selina for taking the stage without her consent. She tells him to watch out for future “f**k-ups” should be become president. “If that does happen,” he asks her, “want to be my Veep?” Selina scoffs in disgust before telling Tom to help the others with the balloons before stalking off.

Selina: And you know why? Because they're ignorant, and they're dumb as shit. And that, ladies and gentlemen, is democracy.
********
Selina: Amy ran my campaign before she became unwell

This episode won an Emmy for Outstanding Writing for a Comedy Series.

This episode takes place on the night of the 2016 presidential election, which was held on November 8, 2016. This date was confirmed in Kissing Your Sister.

-There has been one tied Presidential election in American history: the 1800 election between Thomas Jefferson and John Adams. The 12th Amendment, which sets the method of electing the President currently used, was passed soon afterwards to try to prevent this. The last time a candidate failed to get a majority of the Electoral College and the election went to the House of Representatives to be decided was in 1824, in which John Quincy Adams was elected over Andrew Jackson, William Crawford, and Henry Clay. 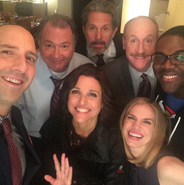 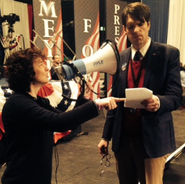 Add a photo to this gallery
Retrieved from "https://veep.fandom.com/wiki/Election_Night?oldid=18780"
Community content is available under CC-BY-SA unless otherwise noted.