Discovery Weekend is the second episode of the seventh season of the HBO original series Veep. It aired on April 7, 2019.

The Meyer camp heads to Aspen, Colorado, for the 16th Annual Discovery Weekend held by major Democratic Party donor Felix Wade. At the welcome square-dance, Selina is shocked to learn that the U.S. Attorney's office in New York is launching an investigation into The Meyer Fund, with Andrew as the main target. Selina learns that Tom James is also there and also wants the support of Felix.

Amy runs to the bathroom to throw up, but is caught by Gary, who believes that she's bulimic. He reports back to Selina.

The next day, Selina meets U.S. Senator Kemi Talbot, the former U.S. Attorney for the Southern District of New York, hoping that she could help remedy the situation with Andrew. However, she's interrupted when she spots Tom, apparently going to a meeting with Felix.

Meanwhile, in New Hampshire, Jonah is in the middle of an interview when he and Teddy learn that Jonah might have been accused of inappropriate behavior. Later, Jonah meets his accuser, insisting that he's innocent, but she instead informs him that the rumors are wrong, and that his behavior was nothing but professional. Jonah, instead, insists that his behavior was inappropriate, saying "You are a stone-cold, neck-down hottie. I want the whole world to know we dated."

More and more women are coming forward, claiming that they never dated Jonah, launching the "Not Me" movement. Jonah, insistent that he's a player, denies these claims. With his numbers dropping in New Hampshire, Jonah begins setting up shop in Iowa where he intends on campaigning.

Back in Colorado, Amy informs Selina that she's pregnant with Dan's baby. Selina is less than thrilled. Amy returns to the cabins to talk to Dan, but after catching him in the midst of having sex with a 19-year-old, calls to schedule an abortion.

Selina is able to poach Felix away from Tom. Felix invites her to his "Marshmallow Roast Talk" where he wants her to speak. That night, before talking, Selina speaks to Tom, who reveals that he loves her. This throws Selina off her game as she embarrasses herself on stage in front of Felix and the rest of the crowd. Afterwards, Selina and Tom spar, until they learn that they both have had heart attacks in the last year. They share a moment, with both refusing concede in the presidential race, admitting that's what they like about each other.

The next day, Selina catches Felix's attention again with the prospect of announcing her running mate before the Iowa caucuses, and that her running mate will be Senator Talbot. However, after Mike catches her "outing" Felix, he withdraws his support and instead plans on supporting Kemi Talbot for President.

-This is the least-watched episode of Veep ever, with only 0.47 million viewers. Because of the premiere of Game of Thrones, the next episode's viewership would more than double to 1.00 million viewers.

-This episode introduces Rhea Seehorn as Michelle York. In the original 2007 ABC pilot for Veep that was never picked up, Rhea Seehorn portrayed one of the main characters: Ollie Tadzio, a young and ambitious speech writer.

Selina says her heart attack (March 2018, see Justice) took place about a year-and-a-half ago, which would date this episode to sometime in Fall 2019. However, that would not make sense with the series timeline, as Amy is still pregnant is still barely showing. Therefore, this episode likely takes place shortly after the events of the previous episode, so April 2019. 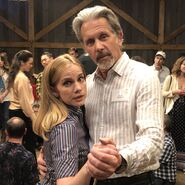 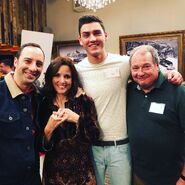 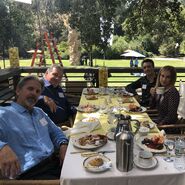 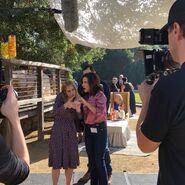 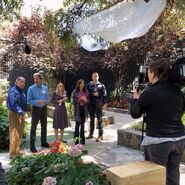 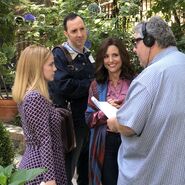 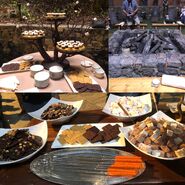 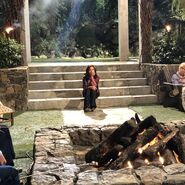 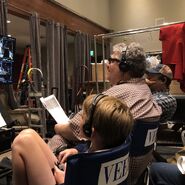 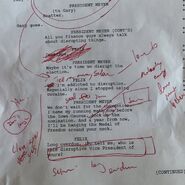 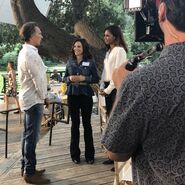 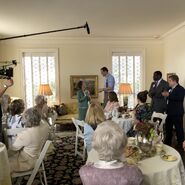 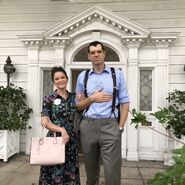 Discovery weekend swag
Add a photo to this gallery
Retrieved from "https://veep.fandom.com/wiki/Discovery_Weekend?oldid=15032"
Community content is available under CC-BY-SA unless otherwise noted.