Data is the third episode of the fourth season of the HBO original series Veep. It originally aired on April 26, 2015.

The staff is caught in the middle of a large scandal and starts looking for someone to take the blame, just as the annual Easter Egg Roll is held at the White House.

Selina does a CBS This Morning interview about the Families First Bill, citing several children in need of aid, including an aspiring ballerina who became HIV positive via breastmilk. Later that day, Dan informs Ben that Reddit users put the information together and outed the little girl, Jennifer Graham.

“People are keeping their kids home from school because they don’t want them to, quote, ‘catch AIDS’,” Dan says. Mike and Bill Ericsson arrive, looking for direction on how to handle the situation, but Ben refuses to tell Selina until they can find out where the data came from.

Catherine brings a newspaper to Selina, upset that the press won’t leave her -- and her personal life -- alone. Unaware that the press has been hounding Mike for a statement about Jennifer Graham, Selina walks into his briefing to ask the press to back off from Catherine’s private life. A reporter takes the op-portunity to ask a blindsided Selina if she feels that “the same privacy should be given to an 8-year-old with HIV”.

Ben informs Selina that there’s been a data breach: medical and social security records, including Jennifer Graham’s, were hacked by a member of her campaign team and subsequently used in the Families First press pack. Selina demands her staff find a scapegoat to fire since the responsible party would be impossible to identify. “There are hordes of young women who roam the halls of the West Wing,” Ben advises. “Fifteen percent of them were hired to be fired.” Selina charges Dan with “sacrificing a virgin”.

Backstage at Selina’s campaign rally, Mike pulls Amy aside to tell her that VP Doyle is walking out to “Every Breath You Take” by The Police -- a song that could be seen to be about spying. “Every line ends with, ‘I’ll be watching you,’” Mike hisses. “Sting might as well be singing ‘I’ll access your medical data’ in a fake Jamaican accent.”

Amy and Mike demand that Jonah change Doyle’s music, but he resists because the song is timed to a lightshow. Richard suggests they use “Eye of the Tiger” instead, but “Every Breath You Take” plays acci-dentally anyway. “I usually use a Mac, so this is Windows 8’s fault, if it’s anybody’s,” Richard says.

Following the rally, Amy informs Selina that they’re losing their micro-donors and will soon be down to nano-donors because people want to be removed from the database, fearing it isn’t secure. Selina decides to make a statement to the press about Jennifer Graham. She admits having no knowledge of the data breach but takes full responsibility and vows to hold someone accountable. Her sober tone is, un-fortunately, at odds with the ill-timed firework display that starts behind her.

Dan informs Selina that he’s found a scapegoat in Leigh Patterson, a young female staffer who was in the writers’ room for the Joint Session address and was also at the campaign rally. After getting Selina’s okay, Dan fires Lee, who asks if he will spare her if she cries “like the women do in movies.” Dan assures her it won’t work because she’s “talking to a guy who once broke off an engagement at an Applebee’s and then ordered dessert.”

The next day, news outlets question the “Medileaks” scandal and how far up the chain-of-command it went. Because Lee’s firing did nothing to quell the press, Selina asks who is “next for the guillotine”. Dan proudly announces that he’s been fattening up Jonah for just this occasion, linking him with all of the recent campaign screw-ups. As an added bonus, Dan explains, Jonah has an inherently guilty face, kind of like a “surprised masturbator”. Selina asks Dan to throw Jonah under the bus -- if he can “find one that’s long enough”.

While Dan attempts to fire Jonah, Teddy passes and gropes his testicles. Then Richard arrives with a sandwich. He asks if Dan is firing Jonah for the “campaign data thing”, revealing that Selina’s “I Care” mailer was deliberately targeted at recently bereaved parents. Someone from the campaign used child-mortality data from the same federal data breach that identified 8-year-old Jennifer Graham. Dan swears them both to secrecy before calling Amy, telling her, “Amy, the gates of Hell have opened and you’re my plus-one.”

Dan and Amy burst into the Oval Office to tell Selina about the second data breach, which is a federal crime and could send everyone to jail. The rest of the staff enter, already apprised of the situation; Mike reveals that the second breach came from a student volunteer who’s already gone. Ericsson decides that someone very high up within the Meyer administration needs to resign. Ben volunteers himself, despite Selina’s objections. “This is a head-on collision and I’m your biggest airbag,” he explains.

In the men’s room, Ben reveals to Dan that he’s volunteered himself to be fired, but makes Dan promise to keep quiet until it’s announced. Meanwhile, the staff prepares for the White House Easter Egg Roll, and Dan, despite his promise to Ben, immediately tells everyone Ben’s big news. Shortly after, Kent pulls Dan aside to meet with him and Ben, who informs Dan that the President has changed her mind -- Dan will resign instead. A shocked Dan sits down with Kent and Ben to negotiate a more impressive title to step down from. Mike is already giving a statement to the press and is about to announce the resignation of the wrong guy. Amy rushes to stop him, and a staffer reaches Mike moments before he mistakenly tells the press that Ben is being fired. Mike announces that Dan is stepping down.

Dan leaves, taunted by Jonah, and then the press.

Ben: Hey, Dan.
Dan: Thought you resigned.
Ben: I guess the president changed her mind. It's a fickle world, my friend, and you've just been fickled.
[beat]
Dan: No. No, this is not—this is not real.
Ben: No, you're right Dan, it's a dream. And me and Kent are about to turn into two horny cheerleaders and start making out.
Dan: So am I fired? Please Ben, don't say that I'm fired.
Ben: You're not fired.
Dan: Oh, thank fuck for that.
Ben: Because you've just resigned.
Kent: It's a perfect fit. Worked on the Families First Bill, and handsome. Therefore, guilty looking.
Dan: No, no. No! I know about the targeting of bereaved families and the use of federal data!
Ben: You listen to me, you little fucking turd's assistant, you don't threaten the administration, because we will fucking destroy you! We'll skin you like a squirrel, clean you out like a dirty fucking chimney, and wear you like a glove puppet with my fingers sticking out of your dead fucking eyeballs!!
[beat]
Kent: I cannot endorse that message, but I do acknowledge it.

-Sam Richardson, who plays Richard, was in the bunny suit during the Easter Egg roll. 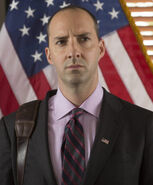 Add a photo to this gallery
Retrieved from "https://veep.fandom.com/wiki/Data?oldid=17017"
Community content is available under CC-BY-SA unless otherwise noted.