Crate is the ninth episode of the third season of the HBO original series Veep. It originally aired on June 8, 2014.

After Selina is caught badmouthing a reporter, putting the campaign in jeopardy, the team gets some unexpected news. Mike worries about balancing his home and work life.

At Selina’s New Hampshire campaign offices, she and her staff watch a victory speech given by Joe Thornhill after winning the Iowa primary. “Listen to this idiot -- they’re not even sound bites, just sounds!” Amy says of his speech. Dan notes that the ex-baseball manager “cornholed” them in Iowa, and Amy admits that he’s killing Selina in the polls. Ben promises Selina that they’ll get her out stumping with the public to help boost her numbers, and Kent presents her with a crate, on which she can stand and address the public. “It’s folksy, it’s traditional…and it’s reinforced with titanium, so you won’t fall through,” he explains. Kent leaves for D.C. to be with President Hughes, who’s having a difficult time with the First Lady following her suicide attempt.

Jonah meets with Bill Ericsson for breakfast, and Ericsson inquires about the state of the Maddox camp. Jonah admits the campaign is in complete chaos. “People can smell the stench of death, and they’re running for the lifeboats,” he reveals. Jonah tells him that he’s waiting on an offer from Chung’s camp, but Ericsson calls his bluff -- he talked with someone on the campaign earlier that morning and knows that no offer is coming. He only met with Jonah to confirm that “the Maddox camp is hemorrhaging like a burst dog.”

While Selina tours a mall, Amy brings word that Quincy Carter, the editor of the New Hampshire Globe, has arrived to speak with the Veep. “Oh god, that Dickensian shit-stack?” Selina mutters. Dan reminds her that Quincy can swing the entire New Hampshire vote. Quincy informs Selina that they’re planning to run a story on her crate -- “Crate Expectations” -- which reveals the “folksy” crate cost $1,200 to make. Dan retrieves Mike from his lunch with Wendy to smooth things over with Quincy, who agrees to do an in-depth interview instead.

Having lost his job with the Maddox camp, Jonah searches for a new gig from his mother’s house. He begs his mom to talk to his uncle Jeff Kane, who controls the senior vote in New Hampshire. “I want a job on my own merits,” he explains, “and I think that he’s the guy who can get it for me.” Despite a rocky relationship with her brother, Jonah’s mom makes the call on “Jay Jay’s” behalf. Jeff agrees to give Chung’s camp a call, but the deal falls apart after he takes offense to something Jonah’s mom says. Jeff hangs up on her.

Immediately following a strange and uncomfortable interview with Quincy, Selina bad mouths him. “He has his head so far up his ass he can wave out his mouth,” she complains. Sue announces that they’ve received another campaign donation -- $4,000 -- which she labels as a GUMMI donation: Give Us More Money, Idiot. Ben asks her, “Whatever happened to HADDA? ‘How About Digging Deeper, Assholes?’” Amy notices that Quincy left his phone on Selina’s desk, and it’s recorded everything. Dan turns it off, but no one can decide what to do about the audio file before the phone locks. Quincy returns, and they’re forced to hand the phone over with the incriminating recording intact.

As Selina prepares to head to a community center, Sue informs her that two of the donors withdrew their donations. Quincy ran a story about the GUMMI code, writing that “any organization donating to the Meyer campaign may want to reflect on how its tight-fisted idiocy is mocked by the woman on the $1,200 crate.” Selina realizes that she’s sunk, having lost Iowa and now New Hampshire. “Do you know what V.P. stands for?” she asks her staff. “Victory Perma-f*cked.” She storms off, calling everyone losers.

The group arrives at the community center and is hounded by the press about the donor story. The community center director introduces Selina to a Syrian couple who had a hellish time leaving their country. Selina, on the verge of tears over her failed campaign, appears deeply sympathetic to their plight. Amy interrupts their conversation to tell Selina that Kent’s returned from D.C., and he’s “acting weird -- not normal-weird but weird-weird.”

In the hallway, Kent tells Selina that the First Lady isn’t in a good place mentally. Hughes has decided that he wants to devote more time to looking after her and is going to resign. “It’s not a dress rehearsal, it’s not a drill,” he tells her. “You are going to be the president.” Selina excuses herself to the bathroom and Gary follows her inside. She shares the big news, which excites him so much he gets a nosebleed.

Selina returns to the Syrian couple in a much better frame of mind, though she’s just as unable to listen as before. Ben interrupts once he gets word that POTUS is resigning in 48 hours and they need to get back to D.C. Amy points out that Selina is still technically running a campaign, so she must elect someone to stay behind and be the face of the campaign. Selina chooses Gary, which devastates him.

Jonah: Someone has just flown two planes into my career.

-According to the DVD commentary, Tony Hale was very sick when he filmed the bathroom scene.

-This episode takes place in January 2016.

-In some European countries, this episode is titled "Gummi", referring to the gang's code when dealing with donors. 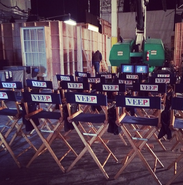 Add a photo to this gallery
Retrieved from "https://veep.fandom.com/wiki/Crate?oldid=18862"
Community content is available under CC-BY-SA unless otherwise noted.