Congressional Ball is the seventh episode of the fifth season of the HBO original series Veep. It originally aired on June 5, 2016.

Selina uses the White House Holiday Party to win over congressmen, as she finds out that Tom has his own agenda; Dan preps Jonah for an upcoming debate; The staff obsesses over an article naming the "50 Hottest D.C. Staffers".

On Air Force One, Selina exchanges souvenirs from the plane for Rep. Penny Nickerson's support of her presidency.

To everyone’s shock, Gary makes The Hill’s “50 Hottest Staffers” list, coming in at No. 21. Amy covers her disappointment when she learns she didn’t make the cut.

Meeting with Tom and her staff, Selina is briefed on the annual Congressional Ball. Roger instructs Selina to schmooze and win over representatives who will impact her votes. Faking an exit from the meeting, Selina returns to discuss Mike’s recent discovery: Tom met with O’Brien supporter Sidney Purcell at a Korean barbecue restaurant. Selina instructs her staff to keep a close eye on Tom at the ball.

When Jonah and Richard mock debate, Jonah proves himself incompetent, but Richard impresses Jeff with his smooth performance as Judy Sherman. Their prep work is interrupted when Dan gets word that Jonah accidentally referred to a Vermont town during a speech in New Hampshire.

On Dan’s orders, Richard follows Judy Sherman with a camera and tries to capture any dirt he can on tape. The widow catches him spying on her at a dinner at the Ladies Club of Manchester and shares some choice words. Richard rushes to show his footage of the encounter to Dan, Jeff and Jonah, but it turns out he accidentally turned the camera off during the exchange.

Selina works the room at the Congressional Ball, brokering deals in exchange for votes. Over the course of the evening, Selina, Kent and Ben discover that Tom is convincing representatives to abstain from voting in the House. He’s realized that if no one gets the majority vote in the House, the decision will go to the Senate, and if it’s up to the Senate, he has a shot at becoming president.

Going into crisis mode, Selina pulls Tom aside to speak privately. Selina accuses him not only of joining her ticket to get a step closer to the presidency, but also to get a step closer to her. She gets Tom to admit he’s wanted to sleep with her, and they begin to passionately make out. Gary walks in on them having sex, but retreats out of the room before he’s observed.

Re-entering the ball, Selina pulls Rep. Nickerson aside and reams her for deciding to pull her support. Nickerson tries to make a play for greater political gain in return for her vote, but Selina threatens total political decimation if the congresswoman doesn’t support her. With the help of her staff, Selina is able to re-secure the votes she lost.

Amy finds out from Candi Caruso, a female staffer who made The Hill’s “50 Hottest Staffers” list, Gary was included because of a typo: Candi’s fiancé, Gary Welsh, was supposed to be No. 21. She wastes no time in pointing this out to Gary Walsh, who had been on the receiving end of much attention due to being on the hotlist.

Jonah works the shoe rental counter at a New Hampshire bowling alley as part of his campaign. When Jonah's groper, Teddy Sykes, shows up at the bowling alley, Jonah confronts him as Richard captures the moment on camera. Dan, Jeff, Richard and Jonah watch the footage play on the nightly news, only to realize the framing of the shot makes it look as if Jonah is insulting a mentally handicapped bowling alley employee. When Richard claims he has recorded the exchange from another angle, it turns out he's made the same mistake with the videocamera again, by turning it off at the crucial moment.

Selina: "You're playing a very dangerous game of chicken with the head fucking hen, 'cause if I don't win the White House, O'Brien is gonna sink your stupid boats and you're gonna look like a hair-sprayed asshole in your 1980s mother-of-the-bride dress. And if I do win, I will have my administration come to your shitty little district and shake it to death like a Guatemalan nanny. And then I'm gonna have the IRS crawl so far up your husband's colon, he's gonna wish the only thing they find is more cancer."

Selina: "So can I count on your vote? Or do I need to shove a box of White House M&Ms up your stretched-out six-baby vag?"

Congresswoman Nickerson: "You can count on my vote."

Selina: "I think I want to hear an 'Okey Dokey, Annie Oakley'."

Selina: "Super Duper, Trooper! Now get the fuck out of here, congresswoman."

This episode received very positive reviews. Kate Kulzick of The A.V. Club gave the episode an A-, calling the best part of the episode the confrontation between Tom and Selina.

-This episode was watched 1.10 million people, tied with Morning After for second highest of the season, behind Inauguration.

-Filmed January 2016. This episode, along with Camp David, mark the only instances wherein the episode of Veep is filmed the same year the episode takes place. Both Congressional Ball and Camp David were filmed in 2016 (January) and both take place in 2016 (December). This is the only time where this occurs throughout the entirety of the show.

Kissing Your Sister reveals that this episode takes place from December 14 - 15, 2016. 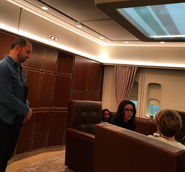 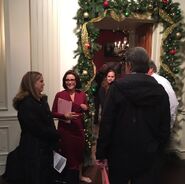 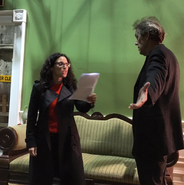 Add a photo to this gallery
Retrieved from "https://veep.fandom.com/wiki/Congressional_Ball?oldid=18842"
Community content is available under CC-BY-SA unless otherwise noted.