Chicklet is the fifth episode of the sixth season of the HBO original series Veep. It aired on May 14, 2017.

Selina settles on a location for her presidential library. Dan lands in a gossip column. Mike and Selina work on her book. Jonah tries to cement a big donation. Gary manages a mini-crisis at Madame Tussauds.

Richard and Amy tell Selina she won’t be getting a library; instead, she’ll donate her papers to American University’s library.

Gary announces they’ve unveiled Selina’s wax figure at Madame Tussauds. Upon seeing the photo of her likeness next to Gerald Ford, whom she deems a “half-term wonder,” Selina demands her figure be moved.

Dedicated to getting Selina to start writing her memoir, Mike uses Selina’s rants about Andrew as a way to uncover more relevant information.

Jonah attends an event at a Jewish Community Center and connects with Sherman Tanz, who introduces him to his wife and daughter, Shawnee. Jonah accidentally insults Shawnee and Ben urges him to fix it.

After talking all night, Mike and Selina look through old family photos; Gary finds them bonding and feels left out. He shows Mike Selina’s new wax figure -- which is bowing to President Lu -- and they discover tourists have been posing provocatively with it.

Richard, who has agreed to be Marjorie and Catherine’s sperm donor, admits he’s never masturbated. He asks them if it hurts.

Having taken Ben’s advice to “fix it,” Jonah wakes up in his office the next morning with Shawnee wearing his bathrobe. She asks Jonah to bring her to his place, and he replies that he lives in his office because “D.C. rents are insane.” She heads out after announcing: “we’ll f**k again tonight at 7:30.”

After cracking up at the wax museum photos, Amy agrees to help Gary remedy the situation. Selina continues her interview with Mike, who brings up some irregularities with her stories about her dad. Needing help, Selina and Mike meet with Selina’s Uncle George who reveals Selina’s father actually died in the family’s barn on top of his secretary, not while away on business – as Selina was told as a girl. Selina and Mike drive to the barn and drunkenly start destroying the place; Selina takes things up a notch and rams her car into the building’s side.

Dan tells Amy about rumors he’s sleeping with Jane, and Gary interrupts with more problems about the wax museum. They now have Selina sitting down with her hand outstretched, in which people are resting “not just the beans, also the franks.” The next day, Jane admits she was the one who planted the rumors of the affair in the press.

Shawnee hands Jonah a bowtie to dumb-down his look and advises him on how to vote so he can garner statewide appeal.

Catherine, Marjorie and Richard go to tell Selina their big news, and Selina announces she’s turning Mee-Maw’s estate into the “Selina Meyer Presidential Birthplace and Library.” The news is disappointing to Catherine who hoped to move there with her family. Amy walks in with her own update: Sherman Tanz is “all in” with the birthplace and library.

Jane: Dan, if I stop being f**kable, then I am grandma. And if I’m grandma, I will be replaced by two tits with a degree from American University. 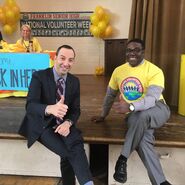 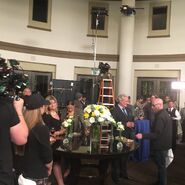 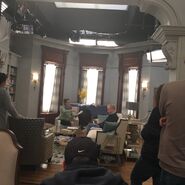 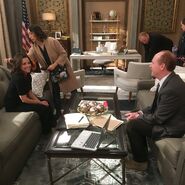 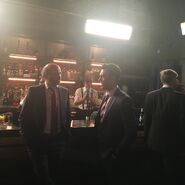 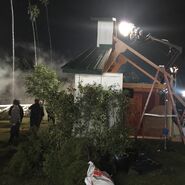 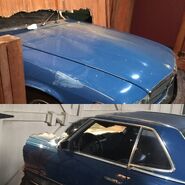 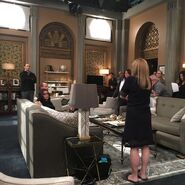 Add a photo to this gallery
Retrieved from "https://veep.fandom.com/wiki/Chicklet?oldid=15225"
Community content is available under CC-BY-SA unless otherwise noted.