Camp David is the eighth episode of the fifth season of the HBO original series Veep. It originally aired on June 12, 2016.

Selina conducts negotiations with the Chinese president on a Christmas retreat intended to be family-only; Jonh inadvertently attracts a large supporter as the New Hampshire election approaches.

On her way to Camp David for a family weekend with Gary, Catherine and “fun Marjorie,” Selina watches a news recap of Jonah thrusting an apple into the face of Widow Sherman at the New Hampshire debate, with only two days left until the New Hampshire Special Congressional Election.

At the Aspen Lodge, Monica decorates a Christmas tree with her newly trademarked “popcornaments,” and Selina feigns delight. Catherine reveals that she and Marjorie are raw food vegans and were hoping to share a "sham-ham" for Christmas. Catherine talks to her father about financial matters because “there’s so much of it that it’s really tough to know what to do with it.”

Selina meets her team to discuss China before their delegates arrive. Ben explains if Selina lifts the sanctions, the Chinese will open industrial plants in Ohio and North Carolina, essentially securing her the presidency. Sue updates Selina that Minna Häkkinen is on her way at China’s request.

Amy, Dan and Richard analyze Jonah’s latest poll numbers; Minna coaches Selina on how to negotiate with the Chinese.

The family exchanges gifts in the lodge. Catherine gives Selina an early Christmas gift: a pen used in 1907 at the Second Hague Convention. Andrew presents Marjorie with a first edition Gertrude Stein and she is stoically “overcome with emotion.” Selina scrambles to find Marjorie a gift.

Minna liaises between the Chinese and Selina. The Chinese present Selina with a framed image of “Sad Piglet,” a popular animated character in China, to which Selina responds, “It looks just like my daughter Catherine.” The Chinese keep presenting gifts, and once again, Selina is forced to improvise. Feeling like she needs to surpass their three gifts, Selina gives the Chinese president the pen that Catherine gave her earlier that day.

Dan tells Selina that Jonah literally shot himself in the foot. Kent is sure this latest blunder will lose him the election. Minna notifies Selina that President Lu wants to go on a nature walk.

Selina and President Lu run into Catherine on their walk, who informs President Lu of her dietary specifications.

Amy knocks on Dan’s hotel door to show him the new Judy Sherman commercial. They notice an anti-Judy billboard outside, courtesy of the NRA. New Hampshire might not be lost, after all.

Selina takes Dan’s call, pushing back her meeting with the Chinese. Minna delays by taking the group on a walk where they see Marjorie, dressed in the robe, kissing Catherine. The Chinese assume it's Selina in the robe. Disturbed, they change the terms of the deal.

Selina, inadvertently using Minna’s negotiation tactics, storms out of her meeting with the Chinese when she sees Catherine discussing her finances with Andrew. The Chinese are moved by Selina’s strength. Minna runs after Selina with the good news, accidentally spilling the beans to Catherine about Selina’s re-gifting of the pen.

After the meeting, Minna informs the team that the Chinese economy is in terrible shape due to the sanctions, but if all industrial metals demands are met, they might consider opening talks to free Tibet.

Wendy calls Mike with news: They’re having twins. Selina attempts to make up with Catherine, who will only speak to Andrew. At the New Hampshire election, Jonah casts his vote.

Selina signs the agreement with China, and faces off with the Chinese president over releasing a statement about Tibet. If she informs the press, they will release proof she lied about the Chinese Twitter hack. Mike is informed by a Chinese official that his adoption has been approved.

Richard: "'Who should I vote for?' You can't teach that. I hope he votes for himself."

This episode received fairly positive reviews, but less positive than previous episodes. Kate Kulzick of The A.V. Club gave the episode a B-, the lowest rated episode besides B/ill.

-This episode marks the third appearance of Minna Häkkinen, who previously appeared in Helsinki and Detroit.

-This episode was watched by 0.85 million people, the lowest of the season.

-The exterior scenes of this episode were filmed at Lake Tahoe in California. According to the crew, it was horribly cold, since it was January. 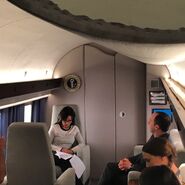 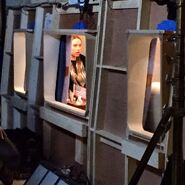 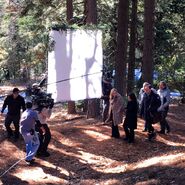 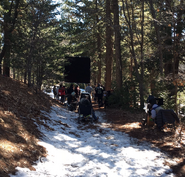 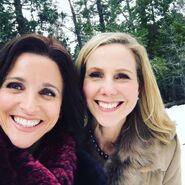 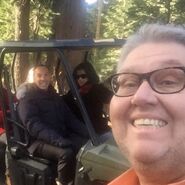 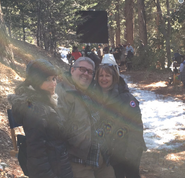 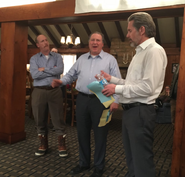 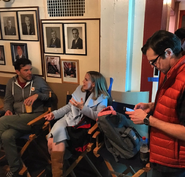 Add a photo to this gallery
Retrieved from "https://veep.fandom.com/wiki/Camp_David?oldid=17052"
Community content is available under CC-BY-SA unless otherwise noted.