C--tgate is the sixth episode of the fifth season of the HBO original series Veep. It originally aired on May 29, 2016.

Selina must make a difficult decision that could affect her relationship with Charlie, as the U.S. economy is on the verge of a disaster; An article claims someone on the Meyer team called Selina the c-word, and Amy is tasked with finding out who; Catherine makes a shocking announcement.

Selina meets with Tom James and her staff to discuss an impending bank bailout. Tom explains they can only afford to bail out two of the three troubled banks. One bank is saved because it's based in Illinois, whose vote they need to win the election. Tom recommends bailing out EM Wheelright, Charlie Baird's bank, because it's the stronger of the remaining two. Ben warns against this, concerned with Selina's future.

A New Hampshire focus group reviews a campaign ad for Jonah. They're frank with their feedback: Nobody likes him. Jonah, watching through a two-way mirror, bursts into the room to yell at his detractors. Selina watches a feed of the disastrous focus group and worries about Jonah's electability, and securing her place in the White House. Adding to her frustrations is a story on Politico reporting a senior staffer was overheard calling her "the c-word." Selina tasks Amy with finding out who insulted her.

Dan, on Amy’s advice, volunteers to run Jonah’s campaign, as he will be a political genius if he can get Jonah to win, and no one will blame him if he can't.

Amy meets with Mike to ask if he knows who called the president a c**t, but quickly scraps the charade and admits it was her. Mike breathes a sigh of relief -- he was certain he was at fault because he shouted the insult into his phone on the Acela quiet car.

Ben and Kent confront Selina on her decision to bail out Charlie’s bank. According to Ben, “literally nobody” understands the economy, so she’ll tank her approval ratings and lose the votes of at least three states instantly -- despite the logic of her choice.

Jonah, in a suit and glasses, heads to a local diner to try and rehab his image, which backfires when he explodes when offered food with fructose. There, Bill Ericsson greets Dan -- his lawyer got his charge thrown out on appeal, and he’s now the widow’s campaign manager. Later, Jonah attends a town hall meeting to give a stump speech along with the Widow Sherman, whom he reveals was his second grade teacher. Dan takes a call from an angry Selina, who reprimands him for doing a poor job on Jonah’s campaign and demands to speak to "the world's tallest pile of garbage" herself. After Selina yells at Jonah, he and Dan commiserate over their shared resentment of POTUS, whom both view as incompetent. Jonah takes the stage and gets a tepid response -- until he starts insulting Selina, and earns a standing ovation.

Throughout the weekend, Selina waffles on whether or not she'll bail out Charlie's bank, and announces her new "final decision" every few hours.

Mike gives a press conference about the “assistance package” Selina will be giving the banks, but the reporters only want to talk about “c**tgate.” Amy decides to meet with the rest of the staff -- all of whom admit to using the word in reference to Selina at some point.

The following day, while Selina and Charlie do a photo-op at a local bookstore, Charlie gets a call from Tom telling him Selina is not bailing out his bank. Despite earlier assurances that she could make a decision regardless of their relationship, Charlie storms out in a rage. Later, Ben praises her decision and Selina admits it was Gary who made her change her mind at the last minute. "He gave me some sappy speech and made me realize what an idiot I was being," she explains.

After trying to talk to Selina all weekend, Catherine finally corners her mother and announces she's fallen in love -- with Marjorie, Selina's Secret Service body double. All Selina can muster is "I wish mother were alive, 'cause that would have killed her. You know how she was."

Later that evening, while Mike is arguing over accepting group-ons at a Korean barbecue restaurant, he spots Tom James meeting with both House Speaker Jim Marwood and lobbyist Sidney Purcell, and immediately leaves to inform the team.

This episode received highly positive reviews. Kate Kulzick of The A.V. Club gave the episode an A- and called it a "strong installment". Tony Sokol of Den of Geek gave the episode a rating of 4.5/5, calling it "scandalously good".

-This episode was watched by 0.98 million people.

-This episode was directed by Brad Hall, Julia Louis-Dreyfus's husband.

-This episode was the final episode to be written by the members of the original British writing staff before David Mandel took over as showrunner at the beginning of the season.

-In the bookstore, some of the books behind Selina and Gary were about Selina, including "Liar in Chief" and "The Meyer Chronicles". Meanwhile, "Some New Beginnings" is 50% off. You can also see a book by the name of "Chesapeake Christmas", which is written by Monica, Andrew's girlfriend. 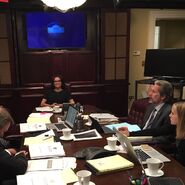 Add a photo to this gallery
Retrieved from "https://veep.fandom.com/wiki/C--tgate?oldid=18843"
Community content is available under CC-BY-SA unless otherwise noted.