Blurb is the seventh episode of the sixth season of the HBO original series Veep. It aired on May 28, 2017.

Selina tries to finish her book. Selina and her staff prepare for her portrait-unveiling ceremony, while Jonah tries to weasel his way onto the guest list. Dan works on his onscreen-chemistry problem.

Amy reads a flattering excerpt of the speech Montez plans to read at Selina’s portrait unveiling. Richard suggests Jonah be added to the guest list -- everyone laughs. Selina and Mike meet with Selina’s editor who tells her they “need a bit more of the presidency” in her book and resolves to collect Selina’s advance if the changes aren’t made.

Catherine, Marjorie and Richard return from the doctor. Selina is unhappy the trio won’t reveal the sex of the baby. After deciding not to put Catherine and Marjorie’s relationship in the book, Selina flippantly suggests a book about her sex life. She tells Mike she slept with Tom James in the Oval Office.

After wrapping an episode of CBS This Morning, Stevie pulls Dan and co-host Brie Ramachandran aside to reveal the findings from the first focus group: people think Brie and Dan have no chemistry. Dan is surprised -- he has actually been sleeping with his co-host.

Selina meets with Tom to discuss including him in her book. He begs her not to mention their tryst because he has a new wife and they’re expecting their first child. After leaving, Selina tells Mike it’s all still going in the book, despite Tom’s pleas. She pitches her editor the new “sexpose” about her affair with Tom; the editor responds by pointing Selina to Tom’s interview about their relationship on CBS This Morning.

President Montez holds court in the Oval and Jonah harasses Candi Caruso for an invitation to the portrait unveiling. Jonah goes to his “Jeffersons” meeting and proposes doing “something big” to attract Montez’s attention. Jonah and his crew vote “no” on Furlong’s debt ceiling vote, shutting down the government.

Selina arrives at the White House for her unveiling where staff are removing the crystal dinner place settings. They enter a room set up like a backyard picnic and are told the staff had to be furloughed because of the government shutdown. Selina confronts Tom, and as they fight, tries to pinpoint moments of sexual tension during their conversation. The ceremony is a bust when President Montez forgoes giving a speech in order to handle the shutdown.

Selina: "What is this dixie cup sh*t show? It’s like we teleported to post-Katrina Mississippi.”

Marjorie states that Catherine is twelve weeks along in her pregnancy. When the baby was conceived in Chicklet, it was in the middle of National Volunteer Week (April 15 - 21), which dates this episode to some point mid-July. A photo of one of the programs of the portrait unveiling reveals it took place on July 13th, 2018. This would mean this episode took place July 8th - 13th, 2018.

-This episode was originally titled "Portrait".

-Filmed December 9 - 16, 2016. The exchange between Selina and Tom in the Red Room was filmed on December 15, 2016, the night that Congressional Ball and their exchange in the Green Room took place. This episode was filmed a month before the previous episode, Qatar. 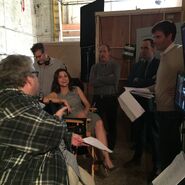 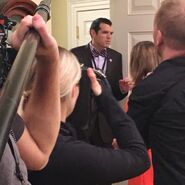 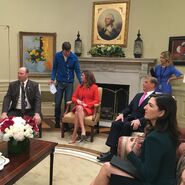 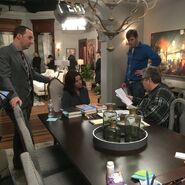 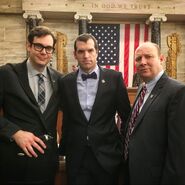 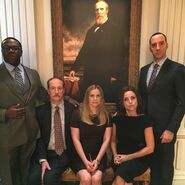 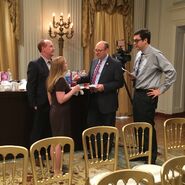 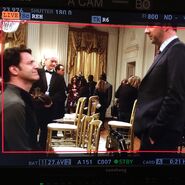 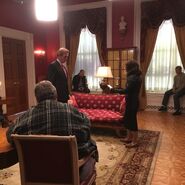 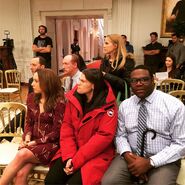 Add a photo to this gallery
Retrieved from "https://veep.fandom.com/wiki/Blurb?oldid=18832"
Community content is available under CC-BY-SA unless otherwise noted.