A Woman First is the ninth episode of the sixth season of the HBO original series Veep. It aired on June 18, 2017.

Selina and Jaffar return to New York where Marjorie notifies them Catherine is on bedrest because “she’s been diagnosed with an incompetent cervix.” Amy and Mike brighten the mood by presenting the team with advance copies of Selina’s book, A Woman First, First Woman, before spotting a typo on the first page.

Jonah takes a look at Selina’s book and is disappointed he didn’t make the cut. Shawnee walks in with bad news: The shutdown hurt him “in Massachusetts’ anus... aka New Hampshire.” Tanz amplifies the blow with news he’s pulling his financial support and threatens to cut Shawnee off if she stays with him.

On the air, Dan announces he’s leaving CBS This Morning, but can be found on the podcast.

Gary shows Selina dress options for her appearance on The Tonight Show and Amy reveals The Washington Post is running an expose on Selina’s time in office. While Mike attempts to tell the truth, Amy blurts out that Leon West has Mike’s diary.

Jonah and Kent are both rejected from the House of Representatives basketball league and after Kent makes a basket, Jonah fires him.

Selina cancels her Tonight Show appearance and meets with Leon West, who apparently has a crush on Amy. Selina threatens to sue West, and when he refuses to pull the article, she offers up Amy. Having rescheduled her appearance, Selina and team review all the terrible things she’s done, now made public. Selina cancels The Tonight Show once again, blaming Catherine’s pregnancy.

Ben, Amy and Dan go for drinks and discuss the implications made about them in West’s exposé. Ben leaves but Dan and Amy continue drinking. At another drinking session, the newly unemployed Ben, Kent and Dan decide to go into business together.

Selina watches Jane McCabe on CBS This Morning; Jane breaks the news that Selina freed Tibet -- not Montez. McCabe refers to Meyer as a heroine and Yale calls with renewed interest in her library.

Jonah, newly circumcised, awakes in his hospital room. Uncle Jeff visits and thanks Jonah for messing up so badly he can replace him with cousin Ezra on the ballot. With this news, Shawnee dumps Jonah.

Selina finally makes her appearance on The Tonight Show despite Richard’s update that Catherine has been rushed to the hospital. On the show, children read all the terrible reviews of Selina’s book.

This episode takes place shortly before the 2018 midterm elections. Considering it doesn't take too long after the previous episode, this episode should take place in October 2018. 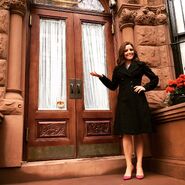 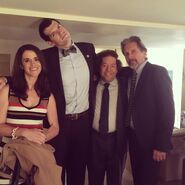 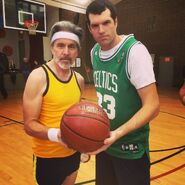 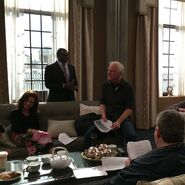 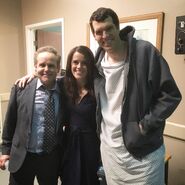 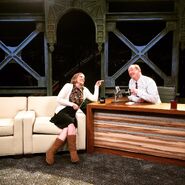 Add a photo to this gallery
Retrieved from "https://veep.fandom.com/wiki/A_Woman_First?oldid=18830"
Community content is available under CC-BY-SA unless otherwise noted.